Last year, around mid-September, I began to pickup on chatter about Bald Eagle sightings at White Rock Lake in Dallas, Texas. White Rock Lake is only a few miles from the downtown Dallas, and is about as urban as any lake in the area. The lake itself is ringed by narrow strip of parkland, but for miles around that it is residential and business developments that dominate the landscape. It is always exciting when unique or unusual wildlife shows up in such an unexpected place.

Now, Bald Eagles at White Rock Lake are not altogether an unusual occurrence. Eagles have been observed there on an annual basis pretty consistently for many years, but ordinarily there would be only one or two brief encounters reported every winter. At first I believed these sightings were just more of the same—a one time event that did not provide much promise for an observation of my own. I made a mental note of the news and planned to keep and eye on the situation to see how it developed.

It did not take long for my initial impressions to be proven wrong. Sightings continued to come in all through the month of September, with three more reported observations before the month’s end. When the sightings of Bald Eagles at White Rock Lake continued on through October, I began to make plans to stop by and have a look for myself!

I made my first trip out to White Rock Lake on the chilly morning of November 19. Eagle sightings continued to be reported, but the frequency had dropped off significantly. I was afraid I may have missed my opportunity.

I started my morning at Dreyfuss Point. I arrived just before dawn, and was treated to a gorgeous sunrise over Dixon Branch. Many species of waterfowl call this part of the park home and listening to the lake come alive with their honks and squawks at daybreak was a real treat.

From Dreyfuss point I slowly made my way around to Dixon Branch, Sunset Bay, and Winfrey Point. Later I would drive down to the spillway to spend some time down by the dam. I wrapped up the morning with a slow and leisurely drive through the park along West Lawther on the off chance the eagle was spending time on that side of the lake.

But no eagles were seen on this first visit (or at least that is what I thought at the time), but White Rock Lake Park is beautiful in mid-autumn and there were plenty of other subjects to photograph.

With no luck on my first outing, I made plans to return to the lake again a few more times before the end of November. Once I get an idea into my head I can be pretty determined to see it through. I was prepared to return again and again, if need be.

I spent a couple of long mornings at the lake in November and followed the same routine as before each time. Most of the reported sightings occurred at Sunset Bay or down near the spillway. Just like before I spent most of my time in these two spots before diving up the west side of the lake on my way home.

No eagles were seen on either of these outings, but I had a ball filling the time photographing the abundant urban wildlife that is always present at the lake.

I returned to the lake several more times during the month of December. The change of season was becoming more and more obvious. Cold temperatures and gray skies were the signature of these visits—as was a lot of shivering on my part!

On Christmas Day there was another great sighting of the Bald Eagle. Friend and fellow wildlife photographer, Amol Khedgikar, got some fantastics shots of the eagle flying with a captured fish in its talons. And then again later as the eagle was perched on a deadfall just off shore at Sunset Bay feeding on its recent catch.

Encouraged by Amol’s recent sighting, I took advantage of my holiday time off from work and headed back out to White Rock Lake a few more times before the year’s end. These were some of my most productive visits. I had great fun for an hour or so one midmorning attempting to photograph quick and darting Forster’s Terns as they fished for minnows in Sunset Bay.

There were also more pictures of our friends the Red-tailed and the Red-shouldered Hawks. And, finally, I was able to photograph another unexpected visitor to the lake—the diminutive Ross’s Goose. This appealing little goose is barely larger than an American Coot. Strangely out of place alone here at White Rock Lake, I usually see Ross’s Geeses mixed in large congregations of Snow Geese and Greater White-fronted Geese. This little guys seems to be something of an outlier!

But, in spite of these being great and fun days for wildlife photography, there was still no sign of the coveted Bald Eagle—I was beginning to feel a little desperate!

On January 5, 2015 I decided to take a chance and head back out to the lake one more time. I would be visiting on my lunch hour, and allowing for time to drive to and from the lake, I would be left with only about 10 to 15 minutes of observing time. Not a lot, but better than nothing. It was a decided long shot, and I did not hold much hope of seeing the eagle this time either.

Arriving at Sunset Bay, I exited the car and walked to the water’s edge. All the usual suspect were present—gulls, cormorants, ducks, geese, coots, and pelicans—but no eagles. After about 10 minutes, I turned and began walking back to the car. I tarried a bit along the way, thinking this likely would be my last attempt of the winter—it was just time to move on to other projects.

As I was pulling out of the parking lot, I caught a glimpse of a large dark bird soaring high above the lake. I started to dismiss it at first as a vulture, but something about this bird struck me as a bit unusual. Turkey Vultures, Black Vultures, Red-tailed Hawks, and even the cormorants can fool you if you observe them from a distance or coming at you head on. But the something—I’m not sure exactly what—encouraged me to give the bird a second look. I quickly parked my car and rushed again to the water’s edge.

Meanwhile the bird had dropped in altitude and was flying in an erratic manner that made it all but certain that this was not a vulture or a hawk. After two aborted attempts, the bird finally committed to a steep dive toward the lake’s surface. Pulling up hard at the last moment, the bird slapped the water with his feet and came away clutching a big fat fish in his talons.

No longer was there room for any doubt—this was definitely an eagle!

Immediately the big bird was set upon by two marauding Ring-billed gulls who were hoping to steal the eagle’s fresh catch. The eagle responded by beating a hasty retreat and soon disappeared behind the trees somewhere in the vicinity of Dreyfus Point. The whole episode lasted less than a minute.

Interestingly, this was not the adult Bald Eagle that had been observed so frequently by others. This was a juvenile of approximately 2-3 years of age. At this stage in their development juvenile eagles still lack the signature white head and tail feathers of the mature adults.

So, it appears that there are at least two different Bald Eagles frequenting White Rock Lake—and maybe even more. Let’s take another look at that photograph from my first visit to the lake back in mid-November…

I was standing on the dam at the time this photograph was taken. The bird was flying over the Arboretum nearly a half mile away. Something about the bird caught my attention, but I only had time for this one picture before he flew out of sight. At this distance I could see very little detail through my camera’s viewfinder. All I could make out for certain is that the bird was uniformly dark in color, and since at that time I was expecting an adult Bald Eagle, I dismissed this bird as a vulture and promptly forgot about taking the picture.

I came across the photograph again a few days ago when I began prepping for this article, and decided to take a closer look. As I zoomed in on the image it soon became apparent that this too was a juvenile Bald Eagle—the overall brown coloration and the heavy yellow bill were sure giveaways. What’s more—though its hard to be sure from the lack of detail in the picture—this eagle appears to be a different juvenile than the one I photographed on January 5.

My guess is that this is a roughly one year old Bald Eagle. What that means is that there are likely at least three different eagles frequenting White Rock Lake from time to time—and maybe even more. How about that! 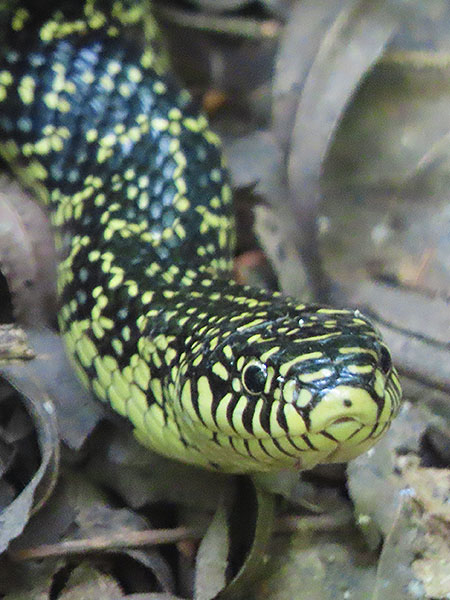 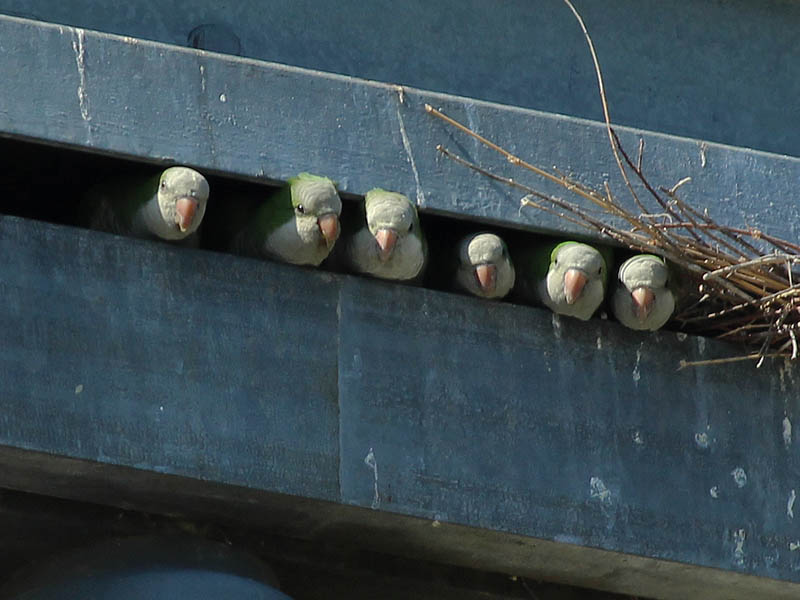 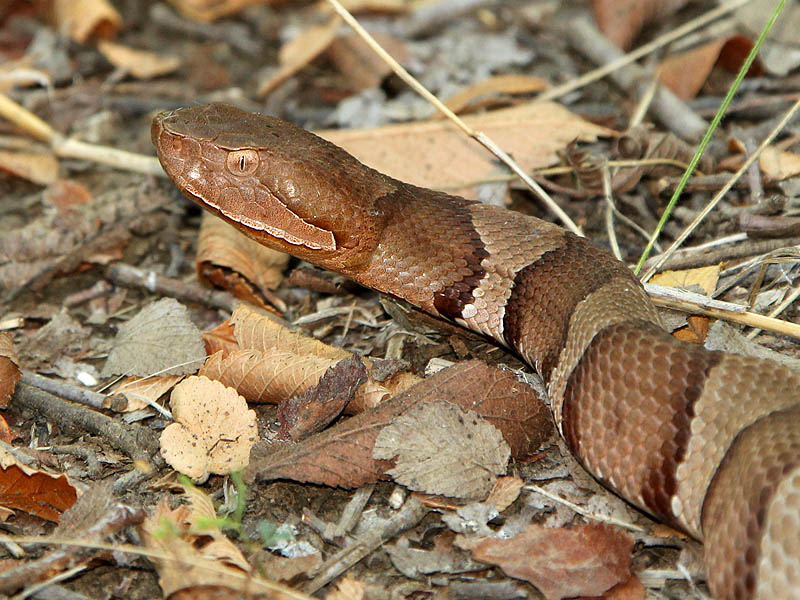