Its been a busy summer. I didn’t get out as often as I would have liked—it seems real life kept getting in the way. A number of special projects I had in mind for this summer will have to be put off until next year. But that’s ok, in spite of the obstacles I did manage to get out in the field on occasion. I even made a few observations of note. Below you will find a brief recap of various urban wildlife sightings made around the metroplex from mid-July through the end of September 2014.

We found these sunning Black Vultures near Quinlan, Texas. Vultures like these spend much of their time feeding on the carcasses of deceased animals—not the most sanitary way to make a living. Exposing their feathers to UV rays in sunlight helps to kill germs and promotes good health.

Back in Lewisville, grasshoppers were the order of the day. Walking through a grassy field at this time of year in North Texas invariably sets off an explosion of fleeing insects. Grasshoppers of every imaginable type are represented.

I encountered more than my fair share of Cottonmouths this summer. Pictured below is a young snake that we found crossing an asphalt road. The snake is posturing defensively in response to the sudden approach of my vehicle.

Towards the end of July and back in Lewisville we found and abundance of Cliff Swallow fledglings begging to be fed by their parents. Time to get out on your own guys! Its a big scary world out there!

Up in Decatur I had the pleasure of watching a juvenile Painted Bunting comically attempt to feed on a grassy seedpod. The bird would fly up and take the pod in his beak. He would then carry the seeds back down to his perch on the ground—bending the stalk in the process. As soon as the bunting would open his beak to begin feeding, the stalk would snap straight again and return the seed pod back to its original position. The young bird tried over and over again to solve this puzzle with no luck!

Also of note at this location was an interesting Sand Wasp photographed carrying a small butterfly back to her nest. After landing, the wasp disappeared briefly into a small hole in the ground. When she reappeared it was sans butterfly. Food for her brood, no doubt. See the pictures below.

Towards the end of August I visited Murrell Park near Grapevine Lake. This is a park I frequented with some regularity in my youth, but until this trip I had not been back in several decades.

Just a few steps from my car I encountered a White-tailed Deer. This was something new—I don’t believe there were deer here when I was a boy.

The sky was full of Mississippi Kites in some parts of the park. I got lucky and was able to approach a pair of juvenile kites close enough for a few nice pictures.

The two were perched high on the branches of a dead tree. As I watched, a Black-chinned Hummingbird—with less than optimal judgement—flew in and landed on a branch roughly midway between the two raptors. There was a pregnant pause as the three birds considered each other and the predicament they were in. The hummingbird came to his senses first and bugged out almost as fast as he had arrived, leaving two confused Kites in his wake.

In Carrollton, I found a place that could only be described as “Turtle Central.” Red-eared Sliders survive around here where ever there is water, and this little drainage ditch was supporting more than its fair share of turtles—and a variety of other urban wildlife as well!

Snowy Egrets are interesting birds. I have observed them fishing for minnows on several occasions. These birds make use of a number of different techniques for catching small fish. Once, I observed a Snowy Egret blowing bubbles on the surface of the water to lure fish in close.

On this day I watched as a Snowy Egret worked a small puddle of water. The clever bird would probe ahead with its outstretched leg in order to push fish into places where he could easily pick them off. Check out the video of this behavior included below.

In Mansfield, Texas I had the privilege of a nice close up of a Giant Green-eyed Robber Fly—a large, unusual looking insect by any measure.

Nearby we found a handsome Texas Spiny Lizard.

A few days later in Plano, I discovered these two Red-tailed Hawks perched together near a suburban subdivision. Flying high overhead was a Swainson’s Hawk. As I mentioned in an earlier post, I have seen many more Swainson’s Hawk this summer than in previous years. I’m not sure how to account for the abundance of sightings!

Back in Lewisville again, I was treated to a nice close look at and Eastern Kingbird perched on a barbed-wire fence. These birds are easier to miss than their more common and colorful relative, the Western Kingbird. Here is what Wikipedia has to say about the intriguing Eastern Kingbird:

The call is a high-pitched, buzzing and unmusical chirp, frequently compared to an electric fence.

Their breeding habitat is open areas across North America. They make a sturdy cup nest in a tree or shrub, sometimes on top of a stump or pole. These birds aggressively defend their territory, even against much larger birds.

These birds migrate in flocks to South America. There is one European record, from Ireland in October 2012.

They wait on an open perch and fly out to catch insects in flight, sometimes hovering to pick food off vegetation. They also eat berries and fruit, mainly in their wintering areas.

Some eastern kingbirds place their nests in the open while others hide nests very well. Eastern kingbirds in Southern British Columbia can nest in open fields; in shrubs over open water; high in tall trees and even in the tops of small stumps. Both male and female participate in nest defense, but females may stay on well-hidden nests longer than females with open nests who may leave nests earlier to chase away predators. Those pairs nesting in the open may be able to see predators coming earlier and rely on aggressive behavior to protect their young.

The aggressive behavior of eastern kingbirds has been shown to keep ravens and crows from finding experimental nests placed near kingbird nests. Similar experimental nests placed far from the kingbird nests were found far more often by crows and ravens. They can also recognize and remove cowbird eggs from their nests. Still, blue jays, American crows, squirrels, and tree-climbing snakes are on occasion nest predators. American kestrels are probable predators of adults.

A brief Bobcat sighting occurred shortly afterward. I always enjoy seeing these cats, they are supremely confident in most instances!

I ran a few trail camera projects in September. Coyotes, White-tailed Deer, and Turkey Vultures were recorded. See the pictures below: 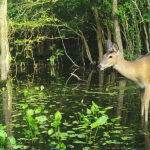