I came across this Texas Rat Snake crossing the road just past the entrance to the Trinity River Audubon Center. The snake was lazily crossing the road, taking its time and moving slowly. I stopped my truck and stepped out to take some pictures.

When I stepped in front of him the snake froze and became motionless. The only sign of life was the snake’s flicking forked tongue. The snake was long—approximately 6ft/2m—but very thin. At his widest I could probably still encircle the snake with my thumb and index finger.

As I photographed him the snake did something strange. While still holding the same general pose I found him in, the snake some how knotted its body so that a weird ripple pattern appeared along its entire length. I’m not sure how to explain this behavior.

After the photo session, I gave the snake a little gentle encouragement with a stick, and he hurried off the road and into the safety of the brush along its edge. 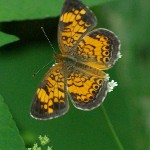 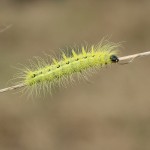