This observation is the continuation of a previous post. The previous article can be found here Red-tailed Hawk – Nest Update 1

In this edition of my weekly Red-tailed Hawk nest observation I found the nest unattended by the adult birds when I arrived. I settled in for a short wait, and within 30 minutes both adults returned to the nest.

The female arrived first and landed high above the nest near the very top of the cellphone tower. The male followed soon afterward, and he was carrying breakfast. From the looks of things the male had captured a European Starling.

As the male approached, the female flew down to the an antenna near the nest. The male landed nearby, and passed the starling on to the female. She then moved down to the nest and began plucking feathers from her prey. This is when I finally got my first look at a juvenile hawk in this nest.

The eyas was excited by promise of the meal to come and began begging to be fed. Later, another young hawk could be seen jockeying with the first for position.

So, there are at least two baby hawks in this nest, and they appear to be around two weeks old. 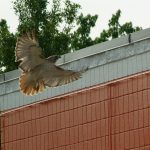 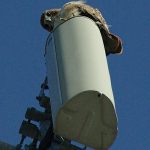 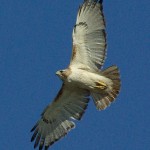