Though coyotes have been observed to travel in large groups, they primarily hunt in pairs. Typical packs consist of six closely related adults, yearlings and young. Coyote packs are generally smaller than wolf packs, and associations between individuals are less stable, thus making their social behavior more in line with that of the dingo. In theory, this is due to an earlier expression of aggression, and the fact that coyotes reach their full growth in their first year, unlike wolves, which reach it in their second. Common names of coyote groups are a band, a pack, or a rout. Coyotes are primarily nocturnal, but can often be seen during daylight hours. They were once essentially diurnal, but have adapted to more nocturnal behavior with pressure from humans. 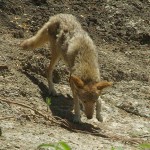