This series of photographs was taken on location in an abandoned ranch in far southeast Denton County. A trail camera baited with apples was used to record these pictures.

The apples proved to be a very good attractant for the Coyotes, and this site had a great deal of activity over the two day period that pictures were recorded. The photographs in this series may represent up to seven different Coyotes (but more likely only 3 to 4), and one surprise guest!

I recorded this set of photographs in an attempt to get a better idea of just how many coyotes we have in the DFW Area, and where they are likely to be found.

Because the abandoned ranch these Coyotes live on is very large, and still relatively isolated, these Coyotes probably only rarely have direct contact with people, making them the least urban of the Coyotes I photographed as part of this exercise. Still, the ranch is surrounded on four sides with main roads, all of which carry heavy traffic every day. And retail, residential, and industrial development is encroaching fast.

These Coyotes won’t be isolated much longer. 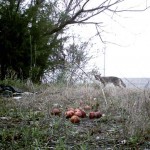 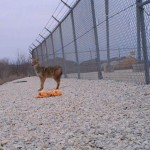 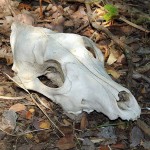 Coyote – Skull
CoyoteFeedingInteractingLewisvilleMating
By DFWUWOctober 9, 2011Chris Jackson's DFW Urban Wildlife1 Comment on Coyote – This Is What They Do

One Reply to “Coyote – This Is What They Do”

Leave a Reply to Out walking the dog Cancel reply