Look for a little wildlife interaction drama in today’s observation. This time I setup my Scouting Camera in a heavily wooded area near the southeast end of Lake Lewisville. I baited the camera with apples and various nuts, and quickly attracted these two Raccoons. A short time later an uninvited guest arrives. If you look carefully you will be able to spot the Striped Skunk’s distinctive black and white tail near the center of this photograph. The Raccoon watches warily as the Striped Skunk moves off to the right behind the tall grass.

The Raccoon appears to give a snarl as the skunk circles around and approaches from behind the camera. The skunk finally succeeds in driving the Raccoon away. I do not blame the Raccoon for making a hasty retreat! Curiously, an Osage Orange (or Horse Apple) with a large bite taken out of it has been moved in front of the camera. I can’t image how it factors in to the event that just transpired. Did the Raccoons place it there? Did the skunk? Did it fall from a nearby tree? The skunk did not appear to stay long, and within an hour and a half the Raccoons had returned. 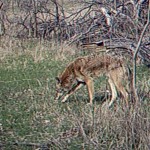 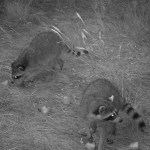