You’ll notice it right away when you visit this location in Cedar Hill, Texas. The dominant sound—noticeable over all others—is the gentle and unmistakable warble of the Painted Bunting…

You have entered the valley of the rainbow birds.

It is not uncommon for there to be dozens of buntings competing for territory in this space. Their song permeates the savanna ravine, and can often be heard coming from multiple different directions at one time. Brightly colored males can be observed jockeying with each other over prime perches, or chasing uniformly green females from tree to tree.

Painted Buntings with their unique and vivid coloration are a Texas favorite. Every color under the rainbow is represented in the bunting’s plumage.

I can remember discovering the Painted Bunting in a Texas Birds field guide when I was a kid. The associated article suggested that these birds were found in Texas, but I assumed they must live along the gulf coast, or maybe in the Trans-Pecos—I spent a lot of time out of doors as a young man, and had never noticed one. How could a bird that colorful live in the Dallas/Fort Worth metroplex without drawing my attention?

Well, it turns out that those bright colors mute out to an indistinct muddy-gray under just a little bit of shade. And because these bird prefer to perch among the branches of the tallest trees, they often vanish into the shadows of the leaves. Even a slight overcast can works to subdue the Painted Bunting’s bright colors.

Listening for the song of these birds is the key to finding them, and even then it is still tricky (see the Tips for Finding and Observing Painted Buntings at the end of this article). Male Painted Bunting like to sit on a high perch and claim their territory by singing—but only periodically. They will sing their short warble, and then wait many seconds before singing it again. Neighboring males often sing back and forth at each other, a territorial behavior called counter-singing, adding to the difficulty. And because these birds are so flighty—fleeing just as soon as they become the slightest bit uncomfortable with an observer’s proximity—it can be confusing trying to determine just exactly where a bunting song is coming from.

Once the singing bird is found, a photographer’s problems are still not over. Painted Buntings never sit still for very long, and they are very wary—getting close enough to take pictures can be very challenging.

The male buntings in this valley mostly busied themselves with defending perches from other males and chasing female buntings. I managed a quick photo or two of one of the glamorously green females when she got a brief respite, and landed on a branch in front of me just long enough to catch her breath…

Painted Buntings can be expected in North Texas from April until mid August. Here’s how Wikipedia describes the distribution and migration habits of this colorful bird…

The painted bunting occupies typical habitat for a member of its family. It is found in thickets, woodland edges with riparian thickets, shrubbery and brushy areas. In the east, the species breeds in maritime hammocks and scrub communities. Today, it is often found along roadsides and in suburban areas, and in gardens with dense, shrubby vegetation. The wintering habitat is typically the shrubby edges along the border of tropical forests or densely vegetated savanna. The breeding range is divided into two geographically separate areas. These include southern Arizona, southern New Mexico, southern and eastern Texas, Oklahoma, Arkansas, Louisiana, northern Florida, coastal Georgia, the southern coast and inland waterways such as the Santee River of South Carolina and northern Mexico. They winter in South Florida, Cuba, the Bahamas, along both coasts of Mexico and through much of Central America. Occasionally, they may be vagrants further north, including to New York, Pennsylvania, and New Jersey. The bird is also found every few years as far north as New Brunswick, Canada. Genetic analyses showed that the species can be divided into three main groups on their breeding grounds: a western, central and eastern group

The buntings in this valley are wary and difficult to get a close look at, especially for a photographer hiking the trails on foot. Their mid-to-late-season plumages are also showing significant signs of wear and tear. A better strategy—one I’ll try next season—might be to come back in the April-May timeframe, and setup an observation station near a water source and with a good view of a tall tree with bare branches. With a little luck and patience, the perfect Painted Bunting picture might just perch right in front of me!

It is also worth noting that Painted Buntings are not the only vividly colored birds calling this valley home during the summer. Buntings share the savanna with a host of other colorful birds. Individually, these other bird species do not possess the full spectrum of colors represented on the bunting, but taken altogether they come close. Here is a short list of some of the other birds and the tints they contribute to the landscape: Indigo Bunting (Indigo Blue), Northern Cardinal (Red), Western Kingbird (Yellows), Eastern Bluebird (Light Blue and Orange), Scissor-tailed Flycatcher (Pink), Ruby-throated Hummingbird (Green). Pictures of each follow…

Finally, there were a few other critters that made appearances that were juts a little too convenient to skip taking their pictures.

Painted Buntings can be observed throughout the metroplex. They are not particularly difficult to find once you set your mind to it. Here are some tip to help you in the effort…

That’s all there is to it. Good luck! 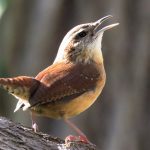 One Reply to “Valley of the Rainbow Birds”