In late February I had the opportunity to venture into West Texas, out Lubbock-way. While there, I intended to follow up on a tip I had been given noting the location of a particular lake, that was said to be a particular draw, to a particularly large flock of Sandhill Cranes, during this particular time of the year.

Around Lubbock there is a virtual spider web of back roads emanating from the city-center and radiating out into the West Texas countryside. For any remote destination you may choose, there are a multitude of country routes that will get you there… all you have to do is pick one. So I did.

My son, Nick, came along with me for the company, the scenery, and to DJ our driving music (70s and 80s classic rock) as we toured the vivid reds, greens, and yellows of a West Texas winter landscape.

Two hours later we arrived at the fabled lake only to find it bone dry and completely absent of waterfowl… cranes or otherwise. In fact, the place was now being used as an ATV park, with several four-wheelers tooling around on the dried lakebed at high speeds. It couldn’t have been much worse than this.

But all was not lost. On the way in, on several occasions, I had noticed large congregations of birds flocking low over the ground out near the western horizon. The new plan was to head back the way we had come and investigate some of these sightings. Undeterred, we hit the road again, this time retracing out previous route.

It was only a short time later when we began to notice, from time to time, small groupings of cranes flying overhead in a westerly direction. The last passel flew over just as we were approaching a T-intersection with a county road running in the same direction that the birds were headed. I slowed and made the turn.

There, down the road and far ahead of us, was a murmuration of cranes, ebbing and flowing low over a distant plowed field. On the ground below them were hundreds of their cohorts busily gleaning the remnants of the last harvest.

We were able to pull over safely on the low-traffic county road just a short distance from the birds, and I began taking pictures. By now the entire flock was on the ground feeding greedily on the leftovers of the previous season’s production. The birds were so preoccupied with their found all-you-can-eat buffet that they were undisturbed by my presence, as well as that of a noisy John Deere tractor working the field just past.

I soon had a nice collection of several hundred Sandhill Crane pictures recorded. With that mission accomplished, my son and I jumped back in the car and headed off for our next destination. We were in search of wherever else there might be unique West Texas wildlife to discover, but that would have to wait until after lunch at a favorite local smokehouse in Lubbock.

Back in Lubbock proper, and after a little-too-large meal, it was Black-tailed Prairie Dogs that we found first. Prairie Dogs are very common in many places around Lubbock—something akin to Fox Squirrel numbers in Dallas/Fort Worth. And like our local squirrels, many of Lubbock’s Prairie Dogs are accustomed to people in close proximity. A fact that makes them relatively tolerant of observation in many cases. Photographing Prairie Dogs is fun. The antics of these chunky rodents are always entertaining.

Moving on to the next stop, we soon found an amazing congregation of Black-tailed Jackrabbits living on the campus of Texas Tech University. The appeal of this spot for the hares was difficult to discern—short, scrubby grass, and the cover of low branching junipers was all this location seemed to offer. Nonetheless, the jackrabbits were here in force, and once again they were well used to the presence of people, and tolerant of observation. Many pictures were recorded.

Canada Geese also find this part of West Texas especially appealing during the winter, and they congregate here in numbers not often seen around the DFW metroplex. This is true even in Lubbock proper. In numerous places around town we found groupings made up of several hundred birds.

On the way home, and just east of Lubbock, I encountered a little herd of Mule Deer. This nice find was very near the southeast limits of the Mule Deer’s range in Texas. One more quick stop was in order as these deer were just a little too photogenic to pass up. Wonderful Wildlife. Texas has got a lot! 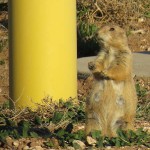 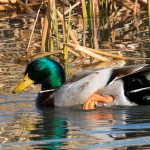