This website is ordinarily dedicated to sharing picture of Dallas/Fort Worth urban wildlife, but every once in a while I will post pictures taken outside the metroplex. These photos–I think–merit the exception. All of these pictures were taken in Lubbock, Texas over the 2019 Thanksgiving holiday.

There are Prairie Dog towns scattered all about Lubbock proper… some of them in surprisingly urban areas. I’m not sure how the residents of Lubbock feel about having these large ground squirrels around, but they seem to be tolerated to some degree. I would be surprised if the Prairie Dog’s habit of digging an intricate network of burrows did not result in some form of conflict from time to time.  I imagine some folks enjoy having the Prairie Dogs around, and others do not–just as is the case with most other forms of urban wildlife.

Black-tailed is the specific flavor of Prairie Dog found in Lubbock.  Estimates are that an acre of land can support an average of around 25 of these large ground squirrels.  Prairie Dogs dig and defend burrows as family groups known as coteries.  Typical colonies consist of several coteries.

Prairie Dog burrows are equipped with multiple entrances and exits.  Their connecting tunnels can run wide and deep–anywhere from 12 to 20 feet in the vertical, and 6 to 15 feet horizontally.  Underground these deep dug tunnels lead to various chambers used for different and specific purposes, including nurseries, sleeping, and food storage.

This particular Prairie Dog town caught my attention as we were leaving Lubbock.  It was located on a major intersection in a small grassy area stationed between a strip mall parking lot and a main thoroughfare. Constrained by concrete and boxed in by dangerous automobile traffic, this seemed an unlikely spot for Prairie Dog colony.  In spite of this, the big ground squirrels seemed to be thriving here.

There were maybe a dozen or more burrows entrances in this small plot of open ground.  Just about as many Prairie Dogs were observed going about their business here–entering and exiting burrows, grazing on greens and seeds, barking their alarm calls–these are thoroughly entertaining little animals!

But the thing that made this observations really special was the sudden and unexpected appearance of this dynamite little Burrowing Owl.  I was still jazzed about watching the antics of the Prairie Dogs, when this intrepid owl hopped out of a burrow entrance right in front of me.  He stood there on one leg, boldly surveying his domain.

Burrowing Owls have a somewhat symbiotic relationship with Prairie Dogs.  The owls rely on the burrows dug by the ground squirrels for their shelter and nesting.  I did some quick googling, but it is still not clear whether the owls share burrows with Prairie Dogs, or if they are able to evict the Prairie Dogs and take control of the burrow for themselves. Maybe they make use of of abandoned burrows. Whatever the case, this owl was stationed right in the thick of it.

It does appear that there are some indications that Burrowing Owls are able to interpret and react to the Prairie Dogs rich warning call vocabulary–an added dimension to the symbiotic relationship that again benefits the owl.  You can read more about this interesting confederation here:  Inside Science – Squatting Owls Eavesdrop on Prairie Dogs.

On a couple of occasions we got to watch the Burrowing Owl hunt.  He would hop around a short distance from the burrow entrance, moving quickly to pin some kind of prey to the ground for capture.  I’m not sure what it was that the owl was hunting, but as it went down the hatch it was obvious that it had many legs–likely some kind of spider or insect. 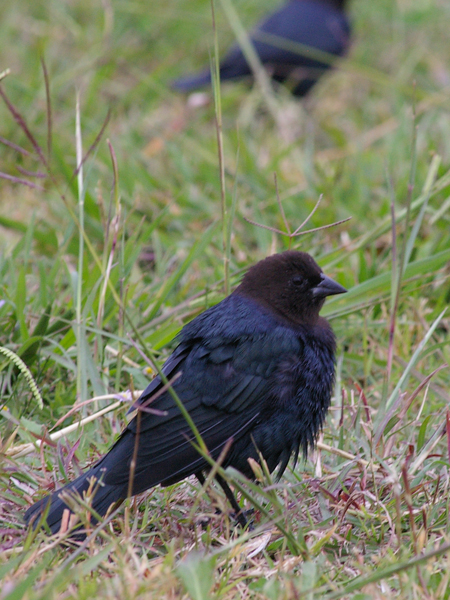