According to Dictionary.com, the “back forty” is a term that refers to “remote, usually uncultivated acreage on a large piece of land, as on a farm or ranch.”

Researching further, I found this more comprehensive description of the “back forty” on Wiktionary.org:

Nearly universal across all large tracts of undeveloped land in urban North Texas are signs of the property’s past use as a farm or a ranch. And one clear indicator that you have stumbled across the back forty of one of these old homesteads is the presence of a ravine like the one pictured below…

It seems to have been common practice on these old family-owned farms to designate an out-of-the-way gully for the dumping of certain types of household trash. The rusty beverage cans with old-style pull-tabs may date much of this garbage back to the 1970’s or earlier.

This back forty is a small part of a roughly 225 acre plot in south Denton County. This property provides nice mix of welcoming habitats, including open areas of tall-grass prairie that surround and gently girdle an extensive bottom-land forest. The woods here closely follow the windings of a small, clear-running creek and its minor tributaries. On the higher ground there is an abundance of evergreen Juniper trees, in some places forming dense groves. All-in-all it’s a great environment for many species of North Texas wildlife.

During times of wet weather the prairie will saturate and begin to pool water. In places you will find acre after acre covered in an inch or more. Underneath it all the wet clay soil becomes ideally malleable–a near perfect stamp pad for recording animal tracks. Combined with winter-chastened vegetation, and you have an optimal environment for tracking–of both large and small animals.

Game trails are easy to notice in conditions like these, and making judgments about the species that laid the tracks, when they were there, and how many individuals passed through is not difficult. Deer tracks, in particular, are plentiful on this plot–nearly every square yard revealed some kind of evidence showing that whitetails had recently passed through.

The dense bottom-land woods provide good cover to the many deer and Coyotes that call this place home. On each visit I flushed one or both animals as I moved along the margins.

These encounters, combined with the abundance of well-defined game trails, inspired me to try a little trail camera project. For this effort I set my cameras to watch game trails at fence lines and creek crossings. My hope was to record photographs of these animal as they leapt to clear these obstacles.

I achieved only mixed success. Slow camera triggers or night-induced motion blur prevented me from getting the pictures I was really hoping for. But, still there were some interesting images recorded. A small collection is shared below.

Perhaps the most interesting encounter I had on this parcel occurred when a flash of red caught my eye as I was moving along the edge of the woods. I was momentarily puzzled. This was certainly a bird, but it was clearly too large—and the red feathers far too sparse–for it to be a common Northern Cardinal. But what else could it be?

I considered the sighting for a moment before the answer came to me… this bird must be the western variety of the Northern Flicker, otherwise known as the Red-shafted Northern Flicker.

The Red-shafted variety is more common in the western reaches of Texas, and only rarely ranges into the metroplex. Just a handful of observations are recorded each year.

Now that I recognized that a Red-shafted Northern Flicker is likely what I had seen, I decided to hold my position in hope the bird would return. As it turned out, I barely had time to check the adjustments on my cameras before the rare woodpecker reappeared.

My good fortune continued as the bird settle settled in a near by berry laden tree to feed. Sure enough, it was a male Northern Flicker. The branch he landed on was in good light and offered a relatively unobstructed view. I took many pictures.

The patches of color on the bird’s head tell the story. The pictures below illustrate how to make the determination.

Winter on the back forty can be long and hard in some years. But in 2018-19, the winter was relatively mild, and the wildlife here seemed to be thriving. My last visit to this parcel of land was in early March. I’m happy to report that there were clear signs of spring and the coming renewal! 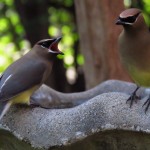 One Reply to “The Back Forty”