This is part one of a two part series. After many years of looking with great interest at aerial photographs and maps of the area, I finally had an opportunity to explore the vast tracts of public wilderness just north of Lewisville Lake. This is one of the most expansive areas of bottomland in North Texas, and as such it calls out for exploration. Greenbelt Corridor Park, located on the eastern outskirts of Denton, Texas, is where we began this expedition.

With me on this trip was photographer, Phil Plank. From the beginning this trip was to be more about exploring than about wildlife photography, but we brought our cameras along nonetheless. At some point along the way I smeared my camera lens with some kind of viscous liquid, and many of my shots came out blurred because of it. That made me doubly glad to have Phil along to help me document the hike. His pictures will fill in many of the gaps in my own coverage.

Those of you who are regular readers of this feature know that I have something of a propensity for wandering away from well established trails. I am inclined to make any excuse I can to explore rarely traveled and seldom visited spots. This hike was to be no different.

The first stop on this hike was a small pond just a short distance from the parking area. By studying Google Maps it was clear that there was some kind of path that cut through the woods at least this far. We would use this pond as a staging area. From here we would try to size up the more ambitious aspects of our plans and determine whether we should give them a go or not. This would also be a good place to regroup in case a retreat became necessary.

Our intentions were to enter woods just past this pond and cut across the heart of the floodplain—visiting a few remote ponds and land forms along the way—before eventually arriving at a group of five small lakes located on the northeast corner of the property, just over a mile and a half away.

The only problem was that I had a very difficult time sizing up the up the terrain using Google Maps and Bing.com. I could tell that the vegetation was going to be very dense—in aerial photographs it resembles the dense fur of a Beaver pelt across most of the floodplain. What was not clear, is just what kind of vegetation this would be. If it turned out to be open field, it should be passable, even if the plants were shoulder high in places.

But no matter how hard I tried, I could not convince myself that this floodplain contained open fields. In North Texas there are certain bushes and trees that grow around in and near wetland areas. Branches on these plants radiate from a central point on the ground and form dense tangles with their neighboring bushes. Where these plants thrive, nearly impenetrable barriers can grow up.

Tracks of Raccoons, Coyotes, and deer abounded on the shores of this pond, but small frogs—known as Blanchard’s Cricket Frogs—provided the preponderance of wildlife at this spot. Walking along the water’s edge, the ground in front of us came alive as dozens of these little amphibians leapt clear of our intended path. Back on the trail we encountered a much larger Southern Leopard Frog. This was good habitat for frogs.

The trail leading away from the pond was draped with oddly curved branches and tree trunks. After some deliberation, it was here that we decided to enter the woods and make our attempt to cross the floodplain. At first the going was not difficult. The branches were high and the ground was clear. We could snake our way through the woods walking upright.

But, the further we wandered from the trail the denser the vegetation grew. It soon became necessary for us to crouch in order to make our way past low hanging branches. We encountered a Feral Hog in here—medium sized and solid black in color. He fled as soon as he saw us. This was a perfect habitat for for these creatures, and the low branches left passable corridors that were just the right size for wild swine.

The strange, arching of the branches and trunks continued on as we made our way through the woods. All of the plants were leaning the same direction as if they had all been permanently bent by the same force at the same time. The vegetation grew thicker and lower to the ground in this region and progress became difficult and slow.

Our intended route is marked in orange on the aerial photograph below, but by the time we reached the location marked with a red “X” we had to concede that we had reached the end of the road.

We had hoped on several occasions that we were about to exit the thicket, but each time it was just a small clearing or momentary thinning of branches that we had found. About 400 yards to the east of where we started, and on our hands and knees, we made the decision that it was time to head back.

Reviewing our hike on aerial photographs later in the day, Phil commented that the place we made it to was, “the beginning of insanity.” I think that sums up the situation pretty well.

It is hard for me to imagine anyone getting through to the heart of this floodplain without a dedicated effort complete with chainsaws and bulldozers. The interior of this plain may very well be one of the most isolated areas in all of the metroplex. The mysterious ponds and lakes inside have probably not seen a human presence in quite some time. I’m sure they would be very interesting to visit.

With no other option left, Phil and I carefully retraced our steps back to the trail, and then followed it a little further north to the utility right of way we intend to use as our “Plan B.” From there we followed the path marked in yellow on the aerial above, with much better success. Following the power lines to the east allowed us to skirt the most impenetrable parts of the floodplain vegetation.

The transmission towers along this route were being used as roosts for dozens and dozens of the Black Vultures and Turkey Vultures. As the sun rose higher in the sky many of these vultures began sunning their wings—a technique these bird use to help sanitize their wing feathers. Feeding on carrion is a dirty business and steps must be taken to avoid disease.

A large female American Kestrel was observed hunting insects along the ROW in sections that had been vacated by the vultures. She would perch high on top of the towers to survey the relative clearing the right of way provided, and then swoop down to grab an unsuspecting grasshopper or dragonfly.

Eventually, we reached a portion of the right of way where the vegetation thinned a bit to the south, and we were again able to enter the woods. This was more of an upland forest and we were able to pass through easily. We soon emerged into the grassland area surrounding the five small lakes that were our goal for this hike.

The lakes are still holding water, but they have been hard hit by years of extended drought. All are reduced in size, and one is nearly completely dry. In spite of this, there was still much evidence of wildlife activity in the area. Deer and Coyote sign were easy to find. Insects of all types began to make their appearance as the mid-morning sun warmed the air. It was late October, but the temperature was scheduled to rise well into the 90s before the day was over—summer releases its grasp with some reluctance in North Texas.

On one pond we discovered a massing of Whiligig Beetles—a common sight in mid autumn. I’m not sure how to explain these fall congregations, but perhaps they are related to mating, or possibly the end of the larval stage occurs simultaneously for many of these insects. Here is what Wikipedia has to say about the Whirligig Beetle:

The whirligig beetles are a family (Gyrinidae) of water beetles that usually swim on the surface of the water if undisturbed, though they swim actively underwater when threatened. They get their common name from their habit of swimming rapidly in circles when alarmed, and are also notable for their divided eyes which are believed to enable them to see both above and below water. The family includes some 700 extant species worldwide, in 15 genera, plus a few fossil species. Most species are very similar in general appearance, though they vary in size from perhaps 3 mm to 18 mm in length. They tend to be flattened and rounded in cross section, in plan view as seen from above, and in longitudinal section. In fact their shape is a good first approximation to an ellipsoid, with legs and other appendages fitting closely into a streamlined surface.

The Gyrinidae are surface swimmers for preference. They are known for the bewildering and rapid gyrations in which they swim, and for their gregarious behavior. Most species also can fly well, even taking off from water if need be. The combination constitutes a survival strategy that helps them to avoid predation and take advantage of mating opportunities. In general the adults occupy areas where water flows steadily and not too fast, such as minor rapids and narrows in leisurely streams. Such places supply a good turnover of floating detritus or struggling insects or other small animals that have fallen in and float with the current.

The adult beetles carry a bubble of air trapped beneath their elytra. This allows them to dive and swim under well-oxygenated water for indefinite periods if necessary. The mechanism is sophisticated and amounts to a physical gill. In practice though, their ecological adaptation is for the adults to scavenge and hunt on the water surface, so they seldom stay down for long. The larvae have paired plumose tracheal gills on each of the first eight abdominal segments.

Generally Gyrinids lay their eggs under water, attached to water plants, typically in rows. Like the adults, the larvae are active predators, largely benthic inhabitants of the stream bed and aquatic plants. They have long thoracic legs with paired claws. Their mandibles are curved, pointed, and pierced with a sucking canal. In this they resemble the larvae of many other predatory water beetles, such as the Dytiscidae. Mature larvae pupate in a cocoon that also is attached to water plants.

We only had time to give this place the most abbreviated once over. Time was running short, so we looked around quickly before staring the long walk back to our cars. This is a very intriguing spot that demands further exploration. We will be back. 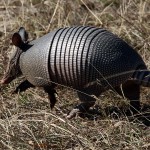 4 Replies to “North to Denton – The Greenbelt Corridor Park”