This was an interesting but brief observation. I spotted this Red-tailed Hawk as I drove into the Lewisville Lake Environmental Learning Area late one afternoon.

The hawk was flying low along the length of the Lewisville Lake Dam—an activity that seems to be enjoyed by the many different species of raptor that frequent the property. The rising air currents created by the steep sides of the dam allows these birds of prey to fly low over the surface. This permits a quick easy drop to the ground whenever a prey animal is spotted, and it also facilitates rapidly returning to the air and the gaining of altitude when the raptor is ready to move on again.

As I watched this Red-tailed Hawk he exercised many of the options this unique environmental feature offered him. At one point the hawk dropped to the ground from a height of about 6 feet (2 meters). It is possible that that the redtail was going after a small prey animal with this maneuver, but if so he missed and came up empty-handed.

Aided by the rising air coming off the dam, the Red-tail Hawk took to the air again almost without effort. With just a minimal amount of altitude the redtail continued his gentle, undulating glide along the length of the dam.

A short time later this hawk encountered another Red-tailed Hawk flying in the opposite direction. The two hawks interacted briefly by circling around and around each other, before they both continued on to the east as a pair.

By this time the birds were beginning to fly out beyond by ability to follow. One of the last things I observed before losing sight of the pair was an encounter with an angry and aggressive American Kestrel.

Kestrels are small, Blue Jay-sized falcons which seemly would be no match for the much larger Red-tailed Hawks. But American Kestrels take much offense when a larger raptor enters an area the kestrel considers to be its own. The smaller bird then uses its superior maneuverability to harass and harry larger birds until it succeeds in driving them away. Of course it helps if the Red-tailed Hawks are just passing through, which was very much the case in this instance. 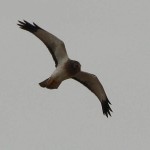 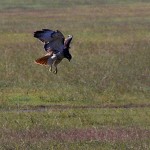 2 Replies to “Red-tailed Hawk – Life Along the Dam”