Mississippi Kites are some of my favorite birds. The uniform slate gray coloration and sleek form of the adult reminds me of a jet fighter plane. Their acrobatic flying skills hone the analogy.

Mississippi Kites are birds of prey, but they hunt mostly insects. On several occasions I witnessed a kite dive out of the sky and skim over the grass in order to nab a hapless grasshopper or dragonfly. With prey in hand (talon) the kites could often be seen feeding while on the wing.

I took these pictures earlier in the summer when I was in far southeast Dallas County to photograph a rare Swallow-tailed Kite. Reportedly, the swallowtail was coming out around midmorning and flying with kettles of Mississippi Kites. And, as it turned out, that was the case.

The Mississippi Kites were to be the indicator that I was in the right place for the swallowtail, but I was unprepared for the sheer number of kites I would encounter on that morning.

At any given time the sky was full of up to 4 or 5 kettles of Mississippi Kites each containing a dozen or more birds. Adults and recently fledged juveniles were present. The sky was swarming with them. 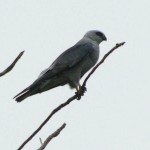