This grasshopper caused quite a stir when we first tried to identify her. Clearly a bird grasshopper of some kind, I expected that finding the exact species would be quite easy for such a strikingly colored bug.

Boy, was I wrong. After scouring the internet for hours I finally turned up exactly ONE photograph of a similar looking grasshopper. That picture was taken in Uvalde County just west of San Antonio, but unfortunately the grasshopper in this picture was misidentified.

Next, I began to consult with experts, only to find them stumped on the ID as well. There was some talk that this might be a new species or subspecies of grasshopper previously undocumented.

Eventually, though, it was decided that this must be the aposematic form of the Spotted Bird Grasshopper. Sure. I’ll buy that, but what the heck does aposematic mean?

Well, Aposematic Coloration is simply conspicuous coloration designed to be a warning to predators that there may be unpleasant consequences if the creature with said coloration is disturbed. Skunks have aposematic coloration. So do Monarch Butterflies.

We all know what the skunk is trying to alert us about. The Monarch Butterfly’s defense is its awful taste. So effective is it unpaletablility that several other butterflies mimic the Monarch’s coloration in order to derive the same benefit. The Viceroy is a prime example.

I’m still unsure just what this grasshopper’s coloration is meant to warn of. 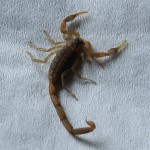 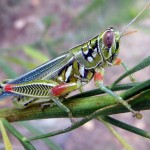 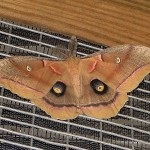 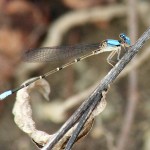