This was an interesting long-distance observation. One morning while I was at Lake Lewisville I noticed some movement along the margins near the water’s edge. At the time it was hard to tell whether it was a Bobcat, Coyote, or dog. The animal skirted the forest for some distance and then ditched into the underbrush.

At home I enlarged the pictures and discovered that I photographed a Coyote. What’s more, the Coyote was carrying something large and tan in its mouth. The object is likely a prey item, but no amount of enlargement or processing allowed me to positively identify what the Coyote was transporting. I can’t help but wonder what it might be! 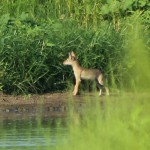 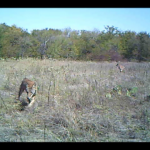 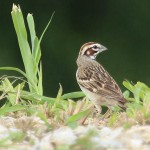