There is a pond behind the Mustang Apartments in Carrollton, Texas. Like most ponds in the area, this one is shrunken due to the extended drought. The water has retreated several yards/meters from the normal shoreline leaving large portions of the pond bottom exposed.

In the photographs below you will see the remains of hundreds of freshwater mussels left stranded as the pond dried up. I believe these are Giant Floaters (Anodonta grandis), one of the most common freshwater mussel in this part of Texas. These mussels are called “Giant” for good reason—the largest shells in this group are approaching 6.5in/16cm in length.

All of the mussels in these photographs are deceased. In fact, all that remains are their hard, calcium carbonate shells. It’s not clear how these mussels met their end. Although it is likely that many survived the initial drying of the pond, only to be dug out of the mud by predators such as Raccoons. 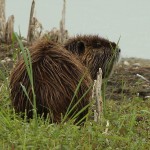 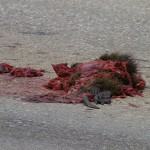 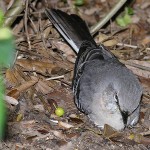