Lemmon Lake could not stand against the long hot Texas summer this year. The brutal heat completely evaporated this small lake in the Joppa Preserve over just a matter of weeks. Left behind was a long, barren mud flat that soon became crisscrossed with a menagerie-representing collection of animal tracks. Feral Hogs, Bobcats, Coyotes, Skunks, Armadillos, Raccoon, and various wading birds all left their marks.

I was keenly interested in monitoring the drying of this lake for a number of reasons. Of these, having a look at what lay under the water was near the top of my list. When I got word that the water was finally gone, I rushed out to have a look.

So, what was I expecting to find? I can’t really say. Mostly discarded bottles and other forms of litter, I suppose. Maybe the carcasses of stranded fish (these were certainly quickly consumed by the lake’s resident predators). Possibly some other kind of sunken treasure, loosely-defined . I certainly expected to find something of interest.

As it turns out, the Great Blue Heron carcass in the photographs below is the most notable thing I discovered. The remains of this bird were found near the center of the lake in a place where the grass was just beginning to grow. Bones and feathers were scattered about in a roughly room-sized area.

The mystery to be solved is, just how did this bird meet its demise? Did he let his guard down just a little too close to the tall reeds along the lake bed’s margin? Great Blue Herons are big birds. It takes a little time for them to build the momentum they need to get airborne. Maybe a quick Bobcat or Coyote managed to snatch this one before he attained a safe altitude.

Whatever the case, it would have been fascinating to witness. 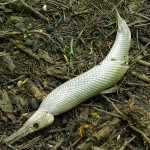 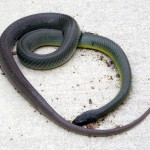 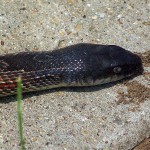 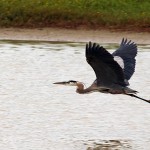