The wooded area that follows White Rock Creek just north of Loop 12 in Lake Highlands has a Raccoon population density as high as I have seen anywhere. The Raccoons in these recordings are feeding on peanuts. At least nine Raccoons participated in this feeding at one time or another.

In another area of the park I came across a roadkill Raccoon. One of the biggest challenges for urban wildlife is the automobile. Wild animals are simply ill equipped to deal with the threat posed by our fast charging vehicles.

No matter what animal is involved, their response to the approach of a fast moving car usually follows the same pattern. When alerted, the animal will make an attempt to flee. Quite often they chose well and break for the near side of the street. But, invariably, the excited creature will second guess himself at some point and reverse his direction—usually with disastrous results.

That is probably how this poor Raccoon’s story played out. 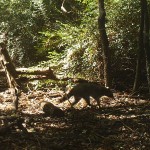 Raccoon – On the Sante Fe Trail