This observation took place in the Great Trinity Forest just north of Interstate 20. I started this expedition at the Trinity River Audubon Center on Loop 12. My goal for this day was to reach Five Mile Creek far to the south.

I was still nearly 200 yards/meters away from Five Mile Creek when I caught a glimpse of a large tan animal moving through the woods near the creek’s edge. The animal passed through a clearing and then back into the woods before I could get to my camera.

I only got a fleeting glimpse of the animal, and with the distance between us, it was impossible to be sure what I had seen. Base upon my first impressions, though, I suspected that it was a deer.

Whatever it was, I fully expected that it would be long gone by the time I reached the creek, but since Five Mile Creek was my objective for the day anyways, I decided to try.

At about 100 yards/meters away, I came across a dried culvert which clearly led to Five Mile Creek. It was deep enough to give me some cover, and the soft dirt on its floor allowed me to approach more quietly. I followed it to the water’s edge.

Other factors were working in my favor as well. The wind was gusting hard today, blowing the trees and grass, and generally making a lot of noise. It was also blowing towards me, and carrying my scent away away from where I had seen the animal. Added to all this were the sounds of traffic on Interstate 20 just a little further south.

When I finally made it to Five Mile Creek, I stepped out onto a large sand bar to have a look around. I was fully exposed at the time. Nonetheless, as I stood there, a large healthy looking Coyote emerged from the woods just 30 yards/meters in front of me. He stepped out on to the same sand bar I was standing on and had a seat. The Coyote’s back was turned to me, so he never knew I was there (though there were times when his peripheral vision should have picked me up). I started taking pictures!

The Coyote seemed to be just enjoying the day. He soaked up some rays for just about a minute, and then he stood up, gave himself a good shake, and then crossed the creek heading down the bank and away from me. I gave him a few steps and then followed right behind. I expected him to see me and run at any moment, but instead he just kept going about his business unconcerned. The Coyote’s lack of caution speaks volumes about how remote this area of the Great Trinity Forest is. This Coyote simply did not expect to come across any people here. As I approached the place where the Coyote crossed the creek I got another surprise. A second Coyote emerged from the woods just a little ahead of my position. I took a few pictures of this Coyote, but he was mostly obscured by vegetation. When I tried to move to a better vantage point the second Coyote spotted me and quickly moved back into the woods.

No warning was given to his compadre though, so I returned to photographing the first Coyote as he went about exploring the far bank of the creek. Slowly, he was making his way around a bend that would take him out of my line of sight. I knew this is where our photography session would end. Just before the Coyote stepped out of view, I gave a short whistle to see if I could get his attention. His first response was to bolt, but he did not go far before turning around to see just what had made that strange, unexpected noise. The Coyote took several steps in my direction before he finally had it figured out. Once he saw me he retreated up the sandy bank and disappeared into the woods. 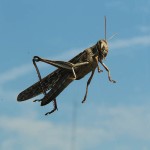