I have been encountering a lot of these guys lately. Generally, my run-ins have been early in the morning—just after sunrise. And, so far they have all been spray-free. Thankfully!

I have also observed a few interesting behaviors from these critters during our meetups. For instance, early one morning at Lemmon Lake a skunk and I surprised each other on a narrow dirt trail. The skunk responded by presenting me with a comical looking, but deadly serious, handstand threat display. The skunk actually supported itself with only its two front legs. Its tail was pointed straight up, and its hind legs dangled off to either side. Fortunately, the skunk had his armament pointed in the the wrong direction, and I was not sprayed.

It seems to me that these skunks are not always keenly aware of whats going on in their surroundings. Their smelly, and effective, self-defense tactic seems to allow skunks a certain nonchalance. I have frequently walked up on one, or had one walk up on me.

Just this past weekend, I was standing in a small clearing, when I heard a small animal making its way through the underbrush headed in my direction. Soon, I saw the black and white fur, and a long bushy tail. I readied my camera, but the skunk pulled up short.

Instead of entering the clearing, the skunk stood up and took a sniff of the early morning air. It was easy to tell when he caught my scent, because he turned tail and ran in the opposite direction. I’m not sure how to feel about finding out a skunk doesn’t like the way I smell!

The Striped Skunk in the pictures below was also observed on the same Saturday morning. This one was working his way across a cow pasture and stopping frequently to search for food. In one of the photographs you can see this skunk engaged in the same cautious behavior of raising up to to sniff for danger as described above. I must have been either downwind or out of range, because this skunk soon continued about his business unconcerned. 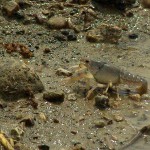 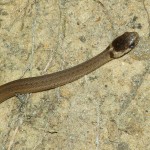 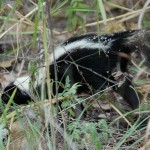