This Three-toed Box Turtle was observed near Old Alton Bridge in Denton County. He was making his way along one of the park’s soft surface trails when I found him.

From the west to the east of its range, the three-toed box turtle can be found from eastern Texas the northern edge of the Florida Panhandle. Its northernmost habitat is in Missouri and Kansas, while the southernmost is in Louisiana. Three-toeds interbreed with other subspecies of eastern box turtles which overlap the borders of this area. An example of this occurs in the eastern Mississippi valley where this species is difficult to distinguish from the common box turtle. Being popular in the pet trade, three-toeds are sometimes found well outside of their home range. It is not known whether such captives when released into the wild have any impact on the local species of such areas. These turtles are adaptive, and are possibly the only box turtle who can live happily in an indoor enclosure. 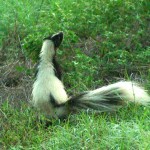