A Cooper’s Hawk was observed in conflict with two Red-tailed Hawks in a residential neighborhood in north Carrollton.

The two Red-tailed Hawks had discovered a roadkilled Fox Squirrel on the sidewalk in front of one of the neighborhood’s homes. They were in the process of consuming the carcass when the observation was made.

A lone Cooper’s Hawk was seen perched on top of a nearby house voicing his displeasure that he was missing out on the easy meal. Despite his efforts, the Red-tailed Hawks were not inclined to leave. Meanwhile, the Cooper’s Hawk could not muster the wherewithal to join them.

The whole scene was disrupted when a school bus unloaded a group of noisy teenagers a few houses further down the street. At that point, all three hawks decided it was in their best interest to leave. 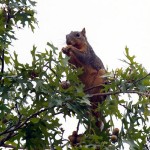 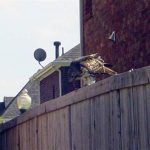 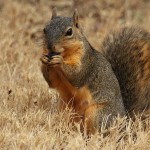