I have recently discovered a real DFW Area gem that I would like to share with you. Nestled in a small wooded area on the campus of the University of Texas Southwestern Medical Center (UTSWMC), just a few miles north of downtown Dallas, and smack in the middle of a bustling urban environment, is one of the most remarkable wildlife viewing opportunities I have ever come across.

For many years I have noticed an abundance of Great Egrets (and other species of egrets and herons) in the general vicinity. Driving up and down I-35 on a regular basis it is hard not to notice the large and majestic birds flying back and forth overhead. But this concentration of egrets, etc. was something I attributed simply to the close proximity of the Trinity River as it meanders its way past the downtown Dallas area.

Recently, however, I ventured off of the main highway and into a part of town that I have rarely visited. Here on Inwood Road, I noticed that many of the Great Egrets flying through the area were carrying sticks, twigs, and other nesting materials in their beaks. And then, just a little further down the road, I discovered a park-like setting where many of these birds were on the ground engaging in mating displays.

I knew right away that there was something special going on at this location, and at my first opportunity I logged onto the Internet to have a look at the area from the air via Google Maps satellite images. I wanted to try and determine whether a visit and exploration of the area would be feasible, and I was amazed at what I found when I zoomed in on the satellite photos.

Not only was the rookery readily accessible, but the satellite photos show an absolute abundance of the large white bird virtually covering the majority of the trees.

Searching the Internet further, I quickly discovered a few interesting tidbits of information about the park (none of which I can verify absolutely). Evidently the area has been established as a bird sanctuary, and has been used as a rookery by these large wading birds for as long a anyone can remember. Reported species observations include sightings of Great Egrets, Snowy Egrets, Black-crowned Night-Herons, Little Blue Herons, Cattle Egrets, Anhingas, White Ibis, Tricolored Herons, Great Blue Herons, Yellow-crowned Night-Herons, and White-faced Ibis.

This virtual smorgasbord of wading birds made a visit to the park irresistible, and as you might imagine, only a few days later I made a special trip to the rookery with my camera in hand. When I arrived, I was absolutely blown away by what I saw there. There were literally hundreds of herons and egrets, with representatives of many species present. Many were already engaged in nesting and brooding activities.

The birds were very tolerant of my presence, and there was an abundance of opportunities to photograph these birds at relatively close range without disturbing their nesting activities (access to the rookery is controlled for the bird’s protection. Please obey all signage when you visit).

As I continue to collect photos over the spring and summer, I will document my findings in articles specifically about each species that I encounter at the park. But, in the meanwhile, here are just a few preview pictures to whet your appetite: 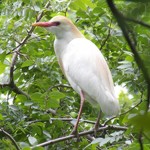 18 Replies to “The Amazing UTSWMC Rookery”