Once I was aware that crayfish in this part of North Texas are able to form colonies well away from standing water, I began to look for their chimneys in other locations. My first find away from the original colony was on the freshly mowed grounds of this neighborhood church. The mud chimneys of this colony were easy to spot from the road as I drove by.

This new colony is roughly two miles to the east of the first colony I found in a neighborhood park.

When I took these pictures I had still not identified the species of crayfish I had found. Through my research, though, I was shocked to discover that there are over 350 species of crayfish in the North America, of which around 36 live in Texas. Further, I was also surprised to discover a number of these species live the majority of their lives in burrows, well away from bodies of standing water. It had been my assumption, up until this point, that all crayfish were strictly aquatic animals. 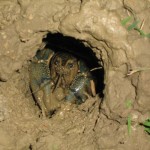 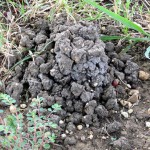