I first noticed this burrow late last winter while exploring a creek bed running through a typical North Texas residential subdivision. The dug out was located about halfway up a steep embankment and was draped by a weave of overhanging branches. The burrow first impressed me as being well situated to act as a den of some kind. The bank was high and sharply inclined so that the burrow would stay protected from the effects rain water and flooding. At first glance it looked like this hole in the ground would make a good home for some lucky critter.

It was the mass of fresh ejecta that originally caught my attention. Sheets of fresh gray clay mixed with small stones fanned out from the mouth of the hole. A good deal of the digging was recent, and judging from the amount of earth moved I suspected that this was the work of a Coyote. But was this actually a Coyote den?

Upon closer examination it became apparent that this dugout was not nearly as large as I had expected it to be. All in all it carved out an area roughly the same volume as a 5 gallon paint bucket. This was not going to the deeply dug hide away I thought it to be. Nonetheless, it was clear that there was something interesting going on here, and I wanted to find out more about it. A trail camera survey would be necessary to reveal the burrow’s secrets, and I just happened to have one handy in my pack. I trimmed back a few branches and then mounted my camera on a near by tree and left it to run.

A few weeks later I returned to retrieve the camera’s SD card. The pictures it contained were compelling and sometimes surprising. Intrigued, I made a few adjustment to the set and let the camera run for another month or so. Below is the story of what I discovered when it was all said and done…

Over the time of the trail camera survey the burrow proved to be a very busy place. My cameras recorded several hundred pictures during the course of just a few weeks. While reviewing the pictures it quickly became evident that Coyotes were indeed responsible for the lion’s share of the excavation. A mated pair returned time and again, and on each occasion they spent a considerably amount of time digging in the hole.

But as suspected, the trail cameras survey revealed that this burrow was not the Coyotes’ den. This hole in the ground was used much more like a hotel room than as an apartment! It is my guess that it was actually ALL OF THE OTHER wildlife activity centered around the dugout that piqued the Coyotes’ interest and encouraged them to stop by periodically to investigate. A virtual menagerie of other critters—everything from birds to reptiles to small mammals—found the burrow a compelling place to hang out.

Let’s begin our look at the at the other visitors by starting at the bottom of the food chain. Seeds exposed by the dug-up, bare earth may explain the burrow’s popularity with these animals. During the day it was birds that foraged here. Wrens, Blue Jays, Brown Thrashers, Dark-eyed Juncos, Northern Cardinals, and at least a couple of species of doves stopped by regularly to feed. At night it was rats, mice, and rabbits that came by the dozens; surely they were the most responsible for leaving the scents and signs that encouraged predators to take notice of the dugout.

Over the course of the trail camera survey several reptiles paid the burrow a visit. Texas Spiny Lizards stopped by often on warm days, surely in search of insects to eat. The fact that the terrain was almost a perfect match for the lizard’s brown and gray camouflage pattern probably didn’t hurt much either. At least one Western Rat Snake (nonvenomous) was photographed at the burrow as well. This—the longest of all North Texas snakes—certainly was on the hunt for rats—as its name implies!

Another predator on the lookout for rats was the Cooper’s Hawk pictured below. This big female seems to have had better luck than some of the other hunters we have looked at—she actually has captured a rat. Her prey is quite possible the rat shown in the second picture below. Its photo was timestamped just shortly before the hawk arrived.

Striped Skunks were another frequent visitor. They often dig burrows of their own that are very similar to this one in size and shape. Skunks primarily use their burrows as dens in which to raise their litters. It’s possible that this skunk was in the market for a new place to call home, but it may be just as likely that he was only passing through on his nightly prowl for insects and other invertebrates to eat.

Of all the small-to-medium-sized mammals to visit the burrow, Opossum stopped by the most often. They also were the only animal that consistently used the dugout as a shelter. Several different Opossums spent the night in the burrow on many separate occasions—all staying for several hours each time.

Raccoons were perhaps the most comical of all of the critters that came to this hole in the embankment. That is probably not surprising to hear, as these highly intelligent animals are always finding new and creative ways to get into mischief. During the time my trail cameras were up and running, several of these masked rascals stopped by to inspect the burrow. Some gave it a more thorough once over than others, and some lingered longer than their compadres, but none of the Raccoons made an attempt to claim the dugout as a permanent home. 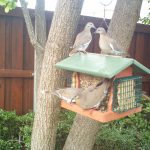