There are a number of different owl species that call North Texas home… Seven to be exact. Here is the list: the Great Horned Owl, the Barred Owl, the Barn Owl, the Eastern Screech Owl, the Burrowing Owl, the Long-eared Owl, and the Short-eared Owl.

Some of these owls are more likely to be encountered than others. A couple are only in the Dallas/Fort Worth Metroplex area seasonally. To find any of them you need to know where to look… and a little bit of serendipity. That these birds are generally nocturnal in their activities only adds to the challenge of observing one.

Of the owls found in North Texas, the Burrowing Owl, the Long-eared Owl, and the Short-eared Owl are typically the least likely to be seen. There are various reasons why. Dallas/Fort Worth is located on the very cusp of the Burrowing Owl’s range, and that means they are not found here in great numbers. Those Burrowing Owls that are here tend to be located in the limited areas around the metroplex that happen to provide a setting similar to their preferred habitats found well west of DFW.

As for Small-eared Owls and Long-eared Owls, they are only in the metroplex during the fall, winter, and spring. They also are inclined to inhabit areas that make finding them challenging. I am still wait to encounter either of these two species in the wild. Because I am not well informed about their habits, I have never even made a serious attempt to try and seek them out.

Then, in November of last year, I received news that Kathy Rogers at Rogers Wildlife Rehabilitation Center had recently taken both a Long-eared Owl and a Short-eared Owl into her care. It occurred to me that this might be an excellent opportunity to see these two owls up close and to learn more about them. Kathy was gracious enough to have me out to the center for a quick look. I took a number of photographs of each owl to share with you. You can see them all below…

The first thing that struck me about both the Long-eared AND Short-eared Owls is how small they were. From pictures of these birds that I had viewed online, I had developed the impression that these were relatively large birds—I had assumed that they came in somewhere between the Barred Owl and Great Horned Owl in size. When Kathy brought out the Long-eared Owl for me to see, it was immediately apparent that I had been mistaken.

The Long-eared Owl looked a little bit like a miniature Great Horned Owl, and is much smaller than I anticipated—falling in between a Burrowing Owl and Barn Owl in size. This particular Long-eared Owl had a beautiful plumage and an engaging face with expressive eyes. He was alert, inquisitive, and surprisingly docile. Kathy had no trouble handling him, in spite of the owl being wild and untamed.

Where can you find Long-eared Owl in North Texas? Ebirds.org has records for a number of observations in many different places around the metroplex. Their sightings map tool might be a good place to identify promising locations to begin a search for these owls. Understanding their habits and preferred habitats would likely be helpful as well. Here is what All About Birds has to say about what you might expect from Long-eared Owls…

Long-eared Owls roost in dense vegetation and forage in open grasslands or shrublands; also open coniferous or deciduous woodlands. They occur at elevations ranging from near sea level to above 6,500 feet. In Idaho, large numbers of Long-eared Owls nest in willows, cottonwoods, and junipers adjacent to shrubsteppe; in several western states these owls also often build their nests in brushy vegetation adjacent to open habitats. In some areas, including in Michigan and western Oregon, Long-eared owl nests are found in coniferous or deciduous forests near open meadows.

Long-eared Owls eat mostly small mammals, including voles, many kinds of mice, kangaroo rats, shrews, pocket gophers, and young rats or rabbits. They hunt over open ground or below the canopy in sparsely forested areas. Prey items usually weigh up to about 3.5 ounces, often less than 2 ounces. They also sometimes eat small birds, capturing them on the ground or (in the case of roosting birds) from low vegetation. Rarely, Long-eared Owls eat moles, bats, weasels, chipmunks, ground and tree squirrels, snakes, and lizards.

Before my visit to the rehabilitation center, I did a little extra homework by scouring the internet for more information about these owls. I found this interesting tidbit (see below) about a group of Long-eared Owls that were discovered in a tree in Carrollton way back in 2001. It’s not clear what attracted the owls to this location, and it doesn’t appear that this unique congregation ever gathered here again. The really crazy thing is that this roost was just a neighborhood over from where I live now—only a minute or two away. If the owls ever were to come back, I would have a front row seat for observing them!

The Short-eared Owl was similar in size to the Long-eared Owl, and just as attractive. Again, the owl was covered in a beautiful array of feathers, and the bright, mascaraed eyes were just a expressive and engaging as you could imagine.

Finding Short-eared Owls in the metroplex poses a similar challenge to that of their long-eared brethren. Again, Ebird.org is probably the place to start. Ebirds has a number of DFW area sightings recorded. And for help with identifying good habitat, here is how All About Birds describes Short-eared Owl preferences…

Short-eared Owls eat mostly small mammals, especially mice and voles. These owls also eat shrews, moles, lemmings, rabbits, pocket gophers, bats, rats, weasels, and muskrats. Short-eared Owl populations tend to fluctuate in close association with the cycling populations of their mammalian prey. They also eat birds including adult and nestling terns, gulls, shorebirds, songbirds, storm-petrels, and rails. In Hawaii, the Short-eared Owl is a key predator of the endangered Hawaiian Thrush. They decapitate and eviscerate small mammals before swallowing them whole. They often take off the wings of birds before eating them.

Hearing is a well developed sense in owls, and it is a very import tool for them when searching for prey. Because these birds hunt in darkness, they rely on their sensitive auditory system to help them to locate rodents and other prey animals by homing in on the noises they make. Kathy took a moment to pull the feathers back on the Short-eared Owl so that I could have a brief look at the bird’s ear canal.

One More Thing of Note…

You may remember from an article I did last year that there is a sizable flock of unique Black-bellied Whistling Ducks that visits the rehab center every evening for a quick meal and a secure roost. The staff puts out a little extra duck feed for them nightly as an incentive to keep the birds coming back. Hundreds of these attractive and noisy ducks arrive at the center with the last light of day. This raucous congregation is definitely a spectacle worth sticking around for, so I did!

A few of these ducks are even more amazing than the others. While I was photographing the feasting birds, Kathy pointed out that a couple of the ducks had lost their feet to the hard freeze we had last February. The Dallas/Fort Worth area is at the very northern end of the Black-bellied Whistling Duck’s range. Most published distribution maps do not even show them ranging anywhere close to the DFW Metroplex. Take this map from Wikipedia for example…

What this means is that whistling ducks are not well adapted to colder climates. When last year’s brutal and extended freeze struck, it was particularly hard on these warm-weather ducks. The result was that a couple of the birds in this flock lost their feet to frostbite.

The truly amazing thing is that somehow the affected birds persevered. No doctors. No medicines. No assistance from the other ducks. They fought through these severe injuries—with extended healing times—and continued to survive despite the sizable handicap. That level of resilience is an incredible thing to behold. 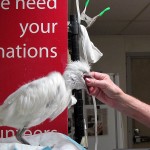 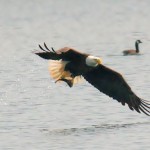 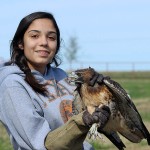