We’ve always had lizards in our yard. At first it was the ever present Mediterranean Geckos that we would see. These unique lizards could be found all over our porch and patio each night, feeding on the insects attracted to our outdoor lighting.

The population of Geckos has dropped significantly this past year–likely due to a family of Eastern Screech Owls that nested in our backyard this past spring. The young owlet’s were fed a steady diet of these little pink lizards for well over a month. Mediterranean Gecko, it’s what for dinner.

The geckos in our yard are down, but they are not out. We fully expect their population to rebound in short order.

Our landscaping had to mature for a few years before we began finding Green Anoles in our yard. These charming and photogenic lizards soon became a fixture around our house, entertaining us with their antics all spring, summer, and fall.

We had been in this neighborhood almost 15 years before I noticed the first Texas Spiny Lizard in our yard. In the intervening years they have become solidly established, and I now encounter them with some regularity.

The Texas Spiny Lizard (Sceloporus olivaceus) is a species of phrynosomatidlizard native to the south central United States, in the states of Texas Arizona and Oklahoma, and northeastern Mexico in the states of Coahuila, Nuevo León, Tamaulipas, and San Luis Potosí. They are quite common throughout their range, where they can be found in trees or on fences.

Adults are 7.5–11 in (19–28 cm) in total length, and are typically grey in color with black, white, or red-brown blotching down the back. Patterns vary greatly by locality, but the colors and pattern typically serve to be adequate camouflage against the bark of trees in its chosen habitat. The underside is usually uniformly light grey in color, but males typically have blue patches on either side of the belly. Their scales have a distinctly spiny texture to them. They have long toes, and sharp claws suited to climbing. 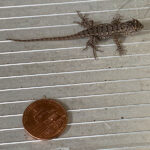 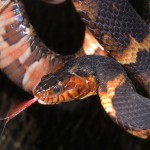 One Reply to “Backyard Dragons”