The video in today’s post comes to us from Richard Barnes. Richard and I found each other via iNaturalist after he posted some really incredible photographs of a trio of juvenile Raccoons taken in his own backyard.

As it turns out, Richard has only recently come to North Texas from Scotland—moving here just last year. When he came over he brought his love of wildlife with him. It didn’t take him long to notice the wide variety of flora and fauna we have right here in the metroplex, and he started taking pictures and recording video.

When he had collected enough material, Richard put together a little YouTube video montage—which he titled Texas Garden Wildlife—for his friends and family back home in Scotland. He shared it with me shortly after we began corresponding, and now Richard has given me the go ahead to share it with all of you.

I think this video is really fantastic. It has some great footage, and captures many of the outdoor sights and sounds of a typical suburb in the Dallas/Fort Worth metroplex. Most of all, it does a great job of illustrating the surprising amount and variety of wildlife one might expect to find in their very own North Texas backyard.

You can read about Richard’s inspiration for making the video in his own words below. The video itself follows. Enjoy!

I’m from Glasgow, Scotland and my wife Shannon has lived in Farmers Branch all her life. I moved here in June last year and we were married in September.

I have always been interested in wildlife and the outdoors and I was a Scout, and more recently a Scout and Explorer Scout Leader. I joined the RSPB (Royal Society for the Protection of Birds) Young Ornithologist Club at school. We went on regular trips at weekends to the RSPB wetland conservation center at Lochwinnoch, in Renfrewshire near Glasgow. The Lochwinnoch website has some great photos uploaded by visitors and is worth a look:

We recently enjoyed a visit to the Hagerman National Wildlife Refuge near Sherman and we make good use of our annual membership at Fossil Rim Wildlife Center near Glen Rose. However, what has most surprised me since I moved here is how much wildlife I have seen at home, in the garden. Shannon planted Salvia, Echinacea, Lantana, Shasta Daisies and other plants in the front to attract wildlife, and the back garden is heavily wooded. We do not use any pesticides at all and unfortunately we have not seen any Fireflies since the City started spraying to control mosquitoes—I guess everything comes at a price.

In the Spring this year I started taking photographs and video of anything I saw in the garden to send to friends and family back in the UK. Some of the wildlife here is so different that the reaction to the photos has varied between “That’s beautiful!” to “What the hell is that?!?”

The Hummingbirds and the Swallowtail Butterflies seem to be the favourites of the folks in the UK . Swallowtails are rare and only found in one small part of the UK—the Norfolk Broads in East Anglia. I remember seeing one on a canal-boating holiday there with my parents, when I was 15.

I have been uploading photos to the iNaturalist website since May—the first observation was a White Lined Sphinx Caterpillar but we have had no luck spotting the Moth yet. My favourite has to be the Green Anoles—they range all over the front garden doing a great job stopping the bugs from eating the plants. The adult female must have been producing eggs for a couple of months as we see new very small young Anoles every two weeks or so.

I had enough video by July to put together a film of the highlights and added some more footage in August . Many thanks to everybody who helped to ID the wildlife. I hope you enjoy watching the film as much as I did making it. 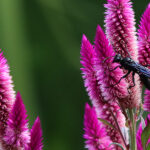 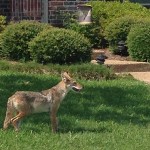