Gadwalls have a subtle and understated beauty that I really admire. From a distance it can be missed. A discerning examination is required to notice it hidden in the muted earth tones of browns and grays. But when you look closer, striking patterns and delicately draped feathers that seem to glow softly with a light of their own reveal themselves.

Here is what Wikipedia says about the charming Gadwall:

The Gadwall is 46–56 cm (18–22 in) long with a 78–90 cm (31–35 in) wingspan. The male is slightly larger than the female, weighing on average 990 g (35 oz) against her 850 g (30 oz). The breeding male is patterned grey, with a black rear end, light chestnut wings, and a brilliant white speculum, obvious in flight or at rest. In non-breeding (eclipse) plumage, the drake looks more like the female, but retains the male wing pattern, and is usually greyer above and has less orange on the bill.

The female is light brown, with plumage much like a female Mallard. It can be distinguished from that species by the dark orange-edged bill, smaller size, the white speculum, and white belly. Both sexes go through two moults annually, following a juvenile moult.

The Gadwall is a quieter duck, except during its courtship display. Females give a call similar to the quack of a female Mallard but higher-pitched, transcribed as gag-ag-ag-ag. Males give a grunt, transcribed as nheck, and a whistle.

The Gadwall is a bird of open wetlands, such as prairie or steppe lakes, wet grassland or marshes with dense fringing vegetation, and usually feeds by dabbling for plant food with head submerged. It nests on the ground, often some distance from water. It is not as gregarious as some dabbling ducks outside the breeding season and tends to form only small flocks. This is a fairly quiet species; the male has a hoarse whistling call, and the female has a Mallard-like quack. The young birds are fed insects at first; adults also eat some molluscs and insects during the nesting season. The Gadwall is one of the species to which the Agreement on the Conservation of African-Eurasian Migratory Waterbirds (AEWA) applies. 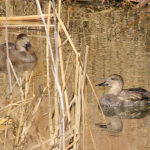 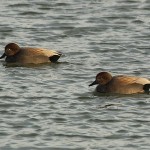 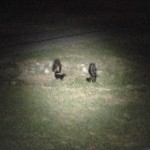 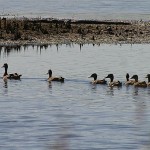