This will be a tale of two vultures—the Black Vulture and the very similar Turkey Vulture. These two species of birds share many traits in common. They are both large and dark in coloration, and they frequently congregate together. Neither bird actively hunts, instead they both feed on carrion—the remains of recently deceased animals.

It’s the way these two vultures find their food that differentiates them from one another. Turkey Vultures tend to forage alone, and they use their sense of smell to locate carcasses. Black Vultures, on the other hand, forage in groups and use their sharp eyesight to find their food.

That is sort of what happened in the pictures below. The only difference is that I do not believe there was a carcass for the birds to tussle over.

Early after I arrived on site I noticed a number of both Turkey and Black Vultures roosting in a nearby tree. As the morning wore on, different birds in the group would shuttle to and from the trees. At one point a lone Turkey Vulture set down near the river very close to where I was working. The vulture began patrolling the shoreline, constantly moving in and out of the tall grass and picking at the ground. There was no carcass visible, so this behavior was somewhat confusing. I speculated at the time that the bird might have been collecting grit for its gizzard.

Whatever the case, a sharp eyed Black Vulture decided he would rather be safe than sorry, so he dropped in to see what the Turkey Vulture was up to. The two big black birds milled around together for a short period of time before they caught the attention of another group of Black Vultures who also decided to join in. The Turkey Vulture was now clearly outnumbered, and even though there was no sign of a carcass—and therefore nothing to fight over—the Black Vultures became ever more aggressive.

Eventually, the Black Vultures succeeded in driving the Turkey Vulture away. But that did not change the fact that there was no food at this spot. The Black Vultures milled about aimlessly for several more minutes. Some even went over to the river to have a drink. As more time passed, the Black Vultures began making discreet exits. It was almost as if they were slightly embarrassed by the whole thing.

Singly or in groups of two, the Black Vultures would leave the ground and land on a nearby branch. Later they might move up higher in the tree if they thought no one was looking. And when the coast was clear they would take to the sky. After twenty minutes or so all of the Black Vultures were gone. Just in time for the Turkey Vulture to make his return! 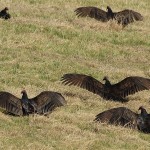