Dragonflies as an insect group have an elaborate system of reproduction. Primary and secondary reproductive organs come into play requiring mating dragonflies to couple in bizarre looking ways.

After mating, many species of dragonflies stay connected through the egg laying process. That is the case with the Variegated Meadowhawks in today’s post.

I discovered many of these dragonflies around a small clear water pond. Some were depositing eggs and others were flying solo.

When depositing eggs the male and the female Variegated Meadowhawks fly around over the water in tandem. The tip of the male’s abdomen remains attached to the back of the female’s head after mating is completed. The brightly colored male leads as the less colorful female deposits her eggs. The two fly together in this configuration hovering low over the water, and dipping periodically so that the female can lay her eggs just under the surface.

In this post you will find several pictures that freeze the fast moving dragonflies so that the dynamics of this action can be more readily observed. Towards the bottom of the post you will find a video that contains just over a minute of footage of this egg laying behavior. 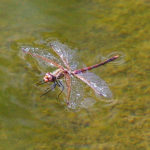 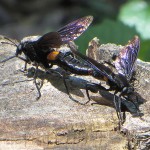 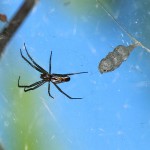 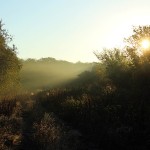 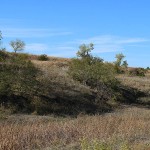