The are pockets of White-tailed Deer in various places around the Dallas/Fort Worth Metroplex. In some of these places the population density of deer is beginning to rise. But urban White-tailed Deer are not always easy to observe, regardless of how many deer a parcel of land supports.

Many different factors influence whether you will see deer or not. The time of day, the weather, the time of year, and proximity to human activity can all make a difference.

When deer are present on a property it is usually not hard to recognize. In places where there are a lot of deer, there will be distinct and well-worn game trails crisscrossing the property. In other locations with fewer deer, careful searches for tracks or droppings will be required for verification.

Once you have determined a park or preserve has a population of deer, the next step is to try to observe them in person. Like I mentioned earlier, this is not always easy. It can be hit and miss. Some days I won’t see a single deer even in places I know are loaded with them. On other days I spot a whitetail every time I turn around. In late October 2013 I had just such a day.

The morning started with a slightly macabre find. The trail I was walking on was littered with the partial skeletal remains of a White-tailed Deer. I had been by this way just a couple of weeks earlier and there were no bones at that time. These remains were relatively fresh. Continuing down the trail, I came face to face with this fine young buck just a few steps further on. Later that morning I was alerted early to the approach of a small herd of deer. I had just enough time to take cover before the deer arrived and strolled single file past my position at very close range. This was an exciting observation! A little further south and I came across my second set of skeletal remains of the day. These bones were still moist and greasy indicating a recent death. Some had clearly been chewed on and crushed in powerful jaws. Now you maybe wondering what kind of predator can regularly take down and feed on full grown white-tailed Deer. In all likelihood there is no such predator in North Texas. It is far more likely that these deer were killed by accidents, and our more common predators—like Coyotes—carried away pieces of the carcasses to feed on in less exposed places. That would best account for the incomplete and scattered nature of the skeletal remains I found.

The deer on this property stayed active well into the afternoon. My last observation occurred as I was headed back to my car at around 12:30 pm. Three does crossed the railroad tracks only a short distance from where I was standing. Another exciting sighting! 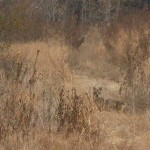 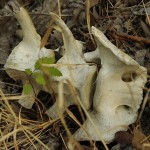 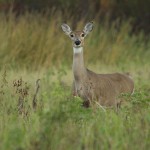 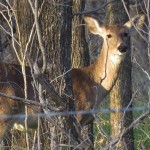