A Common Wood Nymph observed in a field near Lewisville Lake. Here is what Wikipedia has to say about these dainty butterflies:

The Common Wood-nymph (Cercyonis pegala) is a North American butterfly in the family Nymphalidae. It is also known as the Wood-nymph, Grayling, Blue-eyed Grayling, and the Goggle Eye.

The Common Wood-nymph can vary greatly. All individuals are brown with two fore wing eyespots, the lower one often being larger than the upper one. Some may have many, few, or no eyespots on the ventral surface of the hind wing. In the southeastern part of its range, it has a large yellow patch on both surfaces of the fore wing. In the western part of its range, it may have a pale yellow patch or may be lacking one. Individuals in the northeastern also lack the yellow patch, i.e., C. p. nephele. In individuals with no yellow patch, there are two pale yellow eye rings that encircle both the fore wing eyespots. The wingspan measures 5.3 to 7.3 cm (2.1 to 2.9 in). 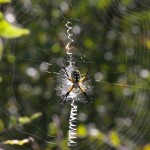 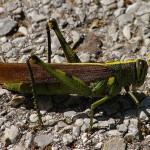 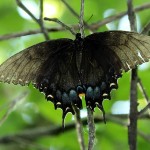