Green Anoles are well know for their ability to change colors. This female anole appears to be beginning the transition from green to brown.

Wikipedia has this to say about Green Anoles:

This species is native to North America, where it is found mainly in the southeastern parts of the continent. Anoles are most abundant on the Atlantic Coastal Plains in North Carolina, South Carolina, Florida, and Georgia, and the Gulf Coast in Alabama, Mississippi, Louisiana, and Texas and have been found as far north as southern Tennessee and southeastern Virginia. The species has been introduced into Hawaii and the Ogasawara Islands. In 2012, there were sightings of the green anole in the San Diego region of southern California. 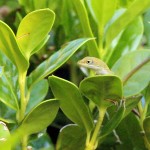 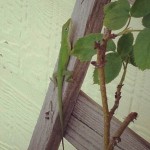