Red-eared sliders of various ages basking in a pond near White Rock Lake.

The red-eared slider (Trachemys scripta elegans), also known as red-eared terrapin, is a semiaquatic turtle belonging to the family Emydidae. It is a subspecies of the pond slider. It is the most popular pet turtle in the United States and is also popular as a pet in the rest of the world, as, among other factors, it is easy to maintain. It has, therefore, become the most commonly traded turtle in the world. It is native to the southern United States and northern Mexico, but has become established in other places because of pet releases and has become an invasive species in many areas, where it outcompetes native species. The red-eared slider is included in the List of the world’s 100 most invasive species published by the International Union for the Conservation of Nature. 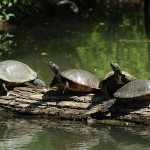 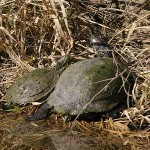 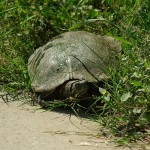 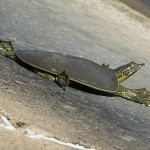 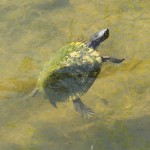