This is a follow up of sorts to an earlier article about what appeared to be a courting pair of American Kestrels. That post can be found here: American Kestrel – Courtship

The photographs in this post shed some new light of the situation, and reveal that the behavior recorded in the earlier post was not courtship after all. The two kestrels simply had a young hatchling they were trying to keep well fed!

The pictures in today’s post were taken roughly a month after those in the earlier article. These photographs illustrate a fledging American Kestrel branching on the structure of the transmission tower as he prepares to take his first flight.

The nest was located in the hollow portion of one of the arms at the top of the tower. For thirty days this small falcon has called the transmission tower home. He will be leaving soon! 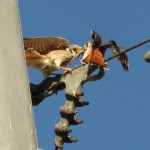 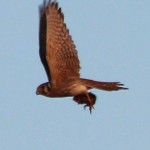 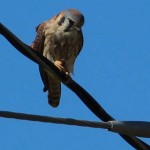 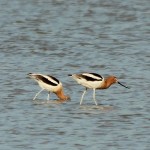 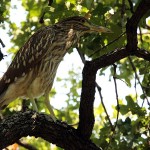