When I arrived at Lake Lewisville on Tuesday June 25, it did not take me long to locate the five Louisiana Whooping Cranes down by the water’s edge. They were in their usual spot and in their usual formation—four together with the odd-bird out. There were a lot of large white birds on the lake this morning, and things soon began to get complicated. Mixed in with the cranes were American White Pelican and Great Egrets. At the distance I was viewing from it was sometimes difficult to keep track of which birds were cranes and which were something else. I made an effort to count the cranes and I kept getting different results each time I did. First I counted five. Then only four. Then six. Six!?! What was going on?

One more count and I ended up with SEVEN Whooping Cranes. A couple of more recounts confirmed it. There were now seven Whooping Cranes at Lake Lewisville.

At home I looked at my photographs, and discovered I had actually photographed the two new cranes meet up and interact with the five original birds. If you look closely at the next picture you will see the Lake Lewisville five near the right hand side of the picture. Back on the left side you will find another pair of whoopers moving in to join the others. As the cranes approached each other the excitement began to build, and there was a brief but dramatic exchange. Some wing flapping and chasing ensued, but when it was all over the two groups gathered together like they were old friends. The group dynamic between these birds is still in the process of working itself out, and the whoopers frequently settled back into a more comfortable 5-2 bird split. Other times a 4-3 three grouping would develop as the odd-bird out from the group of five would sometimes congregate with the two new whoopers. During one of these times, the group of four cranes took to the air and headed out to their other favorite place at the east end of the flood plain. A few minutes later the other three whoopers took off in pursuit of the first four. Surprisingly, about halfway to the destination two of the cranes broke formation and headed back to the water’s edge. The third whooper continued on his way, and soon joined the other four in the tall grass on the floodplain. So, where did the two extra cranes come from? Well, an examination of their leg bands showed that these two new whoopers were actually our old whoopers from Lake Ray Hubbard. Several weeks ago these cranes had left the metroplex for a cattle tank in Wise County. On Monday, June 24, they headed back east and somehow linked up with the five cranes at Lake Lewisille. How these seven Whooping Cranes found each other is completely beyond me! 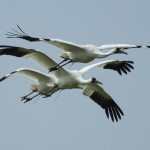 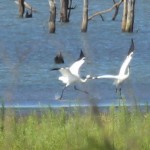 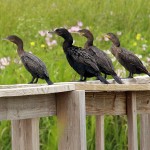