NOTE: This observation is a continuation of a previous post. The earlier article can be found here: Red-tailed Hawk – Baylor Nest Update 7

Its been a while since I last posted about the Baylor Red-tailed Hawk nest, but judging from these pictures things are coming along nicely.

When I arrived, the female was standing on the rim of the nest. She was no longer incubating, which certainly mean there are young red-tails in the nest now. The warm weather meant no brooding was necessary at this time either.

I spotted the male nearly 700 yards/meters away, perched on top of a cell phone tower. Shortly after I noticed him, he took to the air and flew high circles over just to the south of my position. Eventually, he broke off and disappeared to the southeast.

I waited for nearly and hour for him to return. My hope was that he would come to the nest with food. But, that did not happen. Instead, at some point while I was waited, the male returned to his perch on top of the cell phone tower. I decided to go over to have a closer look.

Of note here was an unusual juxtaposition of hawk and European Starling which made them appear to be rubbing beaks in some pictures. An optical illusion! 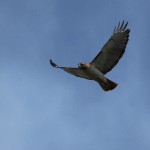 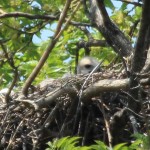 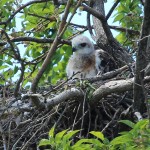 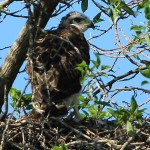 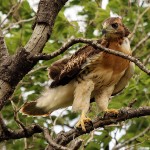