A male and female American Kestrel sitting together, and presenting a nice opportunity to see the differences in appearance between the genders. The male kestrel is smaller that the female, but the male has the more colorful plummage. As you can see from thes pictures the male has slate gray wings carried over a rust colored body, while the female is rust colored with a dark pattern overall. This couple probably represent a mated pair. 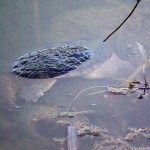