A lone female American Kestrel keeps watch from atop a tree behind the Baylor Medical Center in Carrollton, Texas.

The American Kestrel (Falco sparverius), sometimes colloquially known as the Sparrow Hawk, is a small falcon, and the only kestrel found in the Americas. It is the most common falcon in North America, and is found in a wide variety of habitats. At 19–21 cm (7–8 in) long, it is also the smallest falcon in North America. It exhibits sexual dimorphism in size and plumage, although both sexes have a rufous back with noticeable barring. Juveniles are similar in plumage to adults. 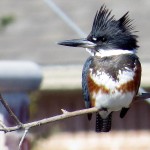