This Fox Squirrel was just hanging out in a Bradford Pear tree in my backyard.

They are not particularly gregarious or playful, in fact they have been described as solitary and asocial creatures, coming together only in breeding season. They have a large vocabulary, consisting most notably of an assortment of clucking and chucking sounds, not unlike some “game” birds, and they warn the listening world of approaching threats with distress screams. In the spring and fall, groups of fox squirrels clucking and chucking together can make a small ruckus. They also make high-pitched whines during mating. When threatening another fox squirrel, they will stand upright with their tail over their back and flick it.

They are impressive jumpers, easily spanning fifteen feet in horizontal leaps and free-falling twenty feet or more to a soft landing on a limb or trunk. 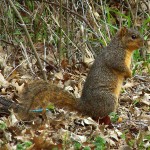