We have at least two baby Bald Eagles as of March 13, 2013. Based on what I can determine from these grainy pictures, the eaglets are between one and two weeks old.

When I arrived on site today, the female was sitting still in the nest as is the usual. She gave me the impression that she was still incubating eggs (maybe there is one more to hatch). Soon, however, the male arrived with food, and that is when the the action really started.

The male stayed just long enough to drop off his catch. He then flew to the top of an adjacent tower to keep watch. The female immediately went to work on the prey animal. The two adult eagles called to each other throughout the entire episode. It was noisy on site today.

The nest is very far away, and even through a telephoto lens it was difficult to discern exactly what was going on in the nest. But, I could tell that the female was tearing off pieces of the kill. I just couldn’t be sure what she was doing with them at the time. It was possible that she was only feeding herself.

It wasn’t until I after I arrived home that I could be sure about what I had witnessed. Using a computer to zoom in on the pictures allowed me to see the two eaglets being fed by their mother. 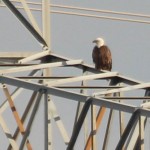 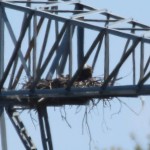 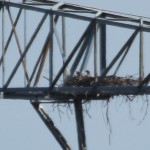 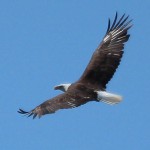 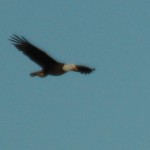