The adult males (drakes) in alternate plumage have a black, effervescent head and a small tuft at the hindcrown, a black breast, a whitish-grey back and wings with darker vermiculations and black outer and greyish-brown inner primary remiges. The underparts are white with some olive vermiculations on the flanks, and the rectrices and tail coverts are black. Adult females (hens) have a white band at the base of the bill, often a lighter ear region, and are otherwise dark brown all over, shading to white on the mid-belly. Drakes in eclipse plumage look similar, but with a very dark head and breast, little or no white on the head and usually some greyish vermiculations on the wings. Immature birds resemble the adult females, but are duller and have hardly any white at the bill base. Both sexes have white secondary remiges, a blue-grey bill with a black “nail” at the tip and grey feet; the drakes have a bright yellow iris, while that of females is orange or amber and that of immatures is brown. Downy hatchlings look much like those of related species, with dark brown upperparts and pale buff underparts, chin, supercilium and back spots.

These birds are not very vocal, at least compared to dabbling ducks. Hens give the namesake discordant scaup, scaup call; in courtship drakes produce weak whistles. Hens vocalize more often than those of the Greater Scaup – particularly during flight –, but their call is weaker, a guttural brrtt, brrtt. 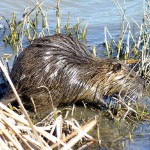 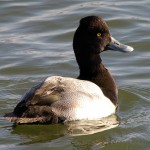 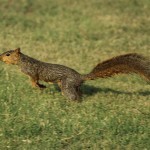