We had an interesting River Otter sighting this past weekend. Like most I have experienced, this one was fleeting, with little chance for quality photographs because of intervening vegetation. But, the viewing was good, and the behavior was unusual enough to merit mention.

We came across this River Otter deep in the woods. He was busying himself in what only could be described as a large puddle of collected rain water. At this location, we were several dozen yards/meters away from Trinity River or any other body of standing water.

When we saw each other, the otter’s first reaction was curiosity, but shortly thereafter he decided to bolt. He turned from us and ran headlong across the open forest floor, heading in the general direction of the Trinity River. The safety of the river was a distant promise though, as the otter had anywhere from 50 to 100 yards/meters to cover to get there. That’s a lot of ground to traverse on foot for this semi-aquatic mammal. 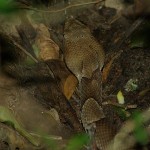 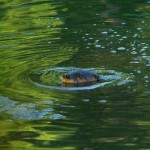 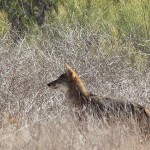 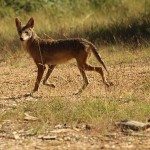