Coyotes are vicious killers, right? Well, maybe. But they are also omnivores (animals whose diet includes both plants and animals), and they REALLY like apples. How much do they like apples you ask? Well, they like them enough that apples have become my preferred bait when I am trying to get Coyotes in front of a Scouting Camera. Coyotes like apples so much that—as is the case in the photographs below—they will return to the site of an apple cache even after all the apples have long been gone.

The Coyotes in this observation returned nightly for at least ten straight days hoping that the apples would reappear. One individual even decided to lay down and stay for a while, no doubt intending to be first in line when the apples were replenished.

These Coyotes were photographed in the City of Plano’s wonderful Arbor Hills Nature Preserve. And, don’t worry, they are NOT vicious killers. These and other Coyotes are in the park at all times, and have been there for years. They work very hard to avoid detection by, and interaction with, people.

Coyotes deserve respect when they are encountered. They should not be fed or antagonized, but they will always retreat, or allow you to slowly retreat, as their first option under normal circumstances. 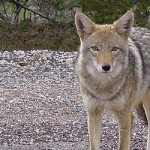 Coyote – Why Cross the Road? 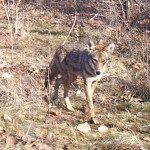 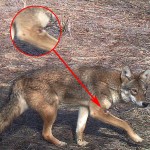 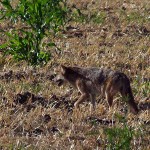