These Funnel Weaver spiders (probably Agelenopsis naevia) were photographed in The Colony, Texas. Their numerous web funnels practically covered the ground in some places.

Funnel Weavers create these web-base structures to alert them to the presence of a prey animal. The spider hides himself inside the small end of the funnel and waits for an insect or other small invertebrate to move onto the web. Vibrations on the web signal the spider that prey is within range. Once alerted, the spider will then quickly emerge and attempt a capture. 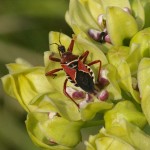 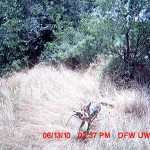