This observation starts out with a Red-tailed Hawk sighting.

I began the morning by taking a walk in our neighborhood’s greenbelt park. The park follows a creek which winds its way through the subdivision. The creek is bridged by residential streets at three different locations in our neighborhood alone.

As I approached the Flowers Drive bridge I noticed a Red-tailed Hawk perched on the roof of the house nearest the creek. I had my camera with me and wanted to take pictures, but the weather was overcast, the light was poor, and the distances where too great, so I didn’t even try.

Still, there was something about the hawk that intrigued me. The big bird seemed to be studying something down in the creekbed and out of my line of sight. I decided to move in closer for a look. If there was something interesting going on down by the creek, great. If not, then I hoped to at least get close enough to take some pictures of the hawk.

Well, the hawk didn’t cooperate. Red-tailed Hawks get antsy easy, and this one flew away before I had even made it to the bridge.

Plan B was to try and find whatever it was in the creek bed that had the hawk’s attention. So, I crossed the Flowers Drive bridge and walked over the the waist high stone wall that ran along its length. Quietly I leaned over for a look.

There in the reeds, just beside the slowly flowing water of the creek, sat a young Bobcat! The cat had its back turned to me and was unaware of my presence. Furthermore, the Bobcat’s attention was focused on the reeds in front of him. There was some kind of prey animal, possibly a small bird, in a tangle of vegetation, and the Bobcat was focused on it at the exclusion of all else. That then is the comedy of this situation. The song bird was being sized up by the Bobcat, who in turn was being eyed as a possible meal by the Red-tailed Hawk! Bird < Cat < Bird. The Bobcat was small, only slightly larger that a house cat, but even so he probably did not have much to fear from the hawk. Still, I got the very real impression that the hawk was giving the Bobcat some serious consideration. Well, distracted as he was, the Bobcat gave me plenty of time to bring my camera to bear. I was very excited. This was my first encounter with a wild Bobcat that amounted to more than just a fleeting glimpse. I started taking pictures, and it was only after this that the Bobcat became aware of my presence. Alerted by the sound of the shutter, the Bobcat turned an looked right into my camera's lens. We continued like this for nearly 30 seconds before the Bobcat decided he didn’t appreciate my admiration. Casually, the Bobcat moved into the reeds and brush as I desperately tried to keep the camera on him. After just a short while he had completely vanished. 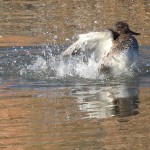 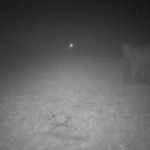 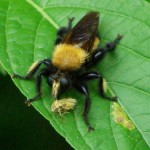 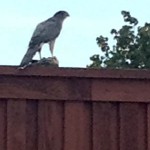 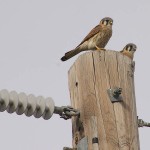