An urban White-tailed Deer in the Dallas/Fort Worth Area. The antlered buck was photographed by a Scouting Camera as he made his way along a well worn cattle trail.

Antlers begin to grow in late spring, covered with a highly vascularised tissue known as velvet. Bucks either have a typical or non-typical antler arrangement. Typical antlers are symmetrical and the points grow straight up off the main beam. Non-typical antlers are asymmetrical and the points may project at any angle from the main beam. These descriptions are not the only limitations for typical and non-typical antler arrangement. The Boone and Crockett or Pope & Young scoring systems also define relative degrees of typicality and atypicality by procedures to measure what proportion of the antlers are asymmetrical. Therefore, bucks with only slight asymmetry will often be scored as “typical”. A buck’s inside spread can be anywhere from 3–25 in (8–64 cm). Bucks shed their antlers when all females have been bred, from late December to February. 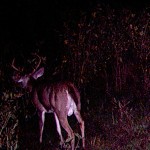