This observations documents the nesting activities of a pair of Mourning Doves from late spring through mid-summer.

Over the course of the summer this pair of doves went on to raise a third and then fourth brood. Midway through their third brood the house they were nesting on was sold and the new owners moved in. After the third brood fledged the new owners removed the nest in preparation for having the house repainted. Within days the doves had rebuilt the nest. Over the course of two weeks the nest was taken down and rebuilt many times over. The doves were relentless about wanting to nest in the same spot and in the end they won out. A fourth brood was successfully hatched and raised before the doves ceded their claim on the porch. 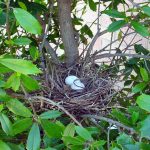 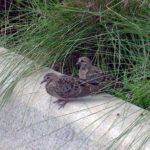